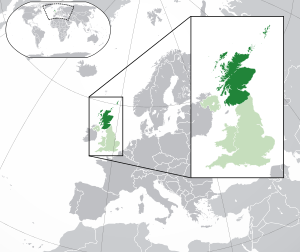 Location of Scotland in the United Kingdom, Europe.

Scotland is one of the countries of the United Kingdom, Europe. Its capital is Edinburgh, and its largest city is Glasgow. In 2013, the population was estimated at 5,327,700.[1]

On September 18, 2014, the people of Scotland voted in a referendum whether or not to become an independent nation.[2] The majority voted to remain as part of the United Kingdom. The results were approximately 55% (no) to 45% (yes) for the question, "Should Scotland be an independent country?".[3]