The Sugar Plum Fairy and Prince Coqueluche take their bows at the Royal Opera House in London, 2009

The Nutcracker is a two-act classical ballet. Marius Petipa wrote the ballet libretto, and Pyotr Ilyich Tchaikovsky composed the music. Petipa and Lev Ivanov choreographed the ballet. The Nutcracker is based on Alexandre Dumas' French translation of "The Nutcracker and the Mouse King", an 1816 German fairy tale by E.T.A. Hoffmann.

The Nutcracker was a modest success; some people liked it, others did not. Most agreed the music was superb. Many years later, the ballet enjoyed even greater success when it was produced in western Europe, Canada, and the United States. Today, The Nutcracker is probably the best known and best loved ballet in the world. 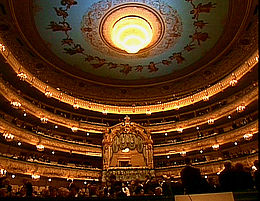 Interior of the Mariinsky Theater

Act I
After a brief overture for strings only, the curtain rises on a salon in the home of the Silberhaus family. It is Christmas Eve. The room has been decorated for a Christmas party. The doors are opened. The children rush in to look at the beautiful Christmas tree, and to open their presents.

More guests arrive. Among them is an odd little gentleman named Drosselmeyer. He is a toymaker and Clara Silberhaus's godfather. Drosselmeyer has brought a few mechanical dolls with him. The dolls dance for the guests.

Drosselmeyer gives Clara a Nutcracker. Clara's brother Fritz handles the Nutcracker too roughly, and breaks it. Clara puts the Nutcracker in her doll bed. She hopes he will recover from his injuries.

Self-caricature of E.T.A. Hoffmann, the author of the 1816 fairy tale, The Nutcracker and the Mouse King

The party ends. The guests leave. The room grows dark as the lights are put out. Clara goes upstairs to bed. A moment later, she returns to the room. She wants to be sure her Nutcracker is resting comfortably.

Suddenly, the Christmas tree grows larger and higher. The room fills with mice. They battle the toys that have come to life. The monstrous Mouse King enters. The Nutcracker leaps from the doll bed. He fights with the Mouse King. When it seems the Mouse King is going to win, Clara throws her slipper at him. It hits the Mouse King, and he hurries away with the other mice. Clara has saved the Nutcracker's life.

He becomes a human prince, and wants to take Clara to the Land of Sweets. The salon disappears. Snow starts to fall. The two children walk through a forest of pine trees. Snowflakes fall faster and faster. The curtain falls. 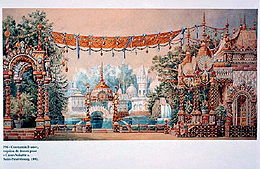 Original design for the Land of Sweets, 1892

The Sugar Plum Fairy orders her subjects to dance for the two children. There are several short dances that include a Spanish dance, a Russian dance, and a dance by Mother Gingerbread and her children. The entertainment ends with the "Waltz of the Flowers".

In January 1890, The Sleeping Beauty ballet was performed at the Mariinsky Theatre in St Petersburg. It was a great success. Tchaikovsky wrote the music for The Sleeping Beauty, and Marius Petipa composed the choreography. Ivan Vsevolojsky, the director of the three Imperial theatres in St Petersburg, believed that another ballet based on a fairy tale with music by Tchaikovsky and choreography by Petipa would have a similar success. He chose Hoffmann's fairy tale for the libretto, and was able to persuade Tchaikovsky and Petipa to join the project.

At first, Tchaikovsky was enthusiastic about the Nutcracker project, but his feelings cooled when he read the libretto. It was made of short episodes and short dances that would not permit him to develop the music on a symphonic scale, as he had done with his two other ballets, Swan Lake and The Sleeping Beauty. Nevertheless, he set to work on the music, came to enjoy the project in the last stages, and completed the score in August 1892.

Tchaikovsky brought some unusual instruments to The Nutcracker. These instruments included toy drums, trumpets, tambourines, and bird calls for the party scene in Act I, a choir of women's voices in the orchestra pit for the "Waltz of the Snowflakes" at the end of Act I, and a celesta for the "Dance of the Sugar Plum Fairy" in Act II. Petipa had told Tchaikovsky he wanted the music for this dance to sound like water splashing in a fountain.

Some of the music for The Nutcracker is well known, especially the "Miniature Overture", the "Children's March", the "Waltz of the Snowflakes", the "Trepak", "Dance of the Sugar Plum Fairy", and the "Waltz of the Flowers". Perhaps because they were included in the popular Nutcracker Suite.

The music for The Nutcracker is known around the world. Tchaikovsky put some of the best music into a 20-minute concert piece called Nutcracker Suite. This suite was first performed for the St Petersburg Musical Society months before the ballet's debut. It was received to great acclaim.

The suite consists of the best music from the ballet and includes the Miniature Overture, the Childen's March, the short dances in Act II, and the "Waltz of the Flowers". The performance of the suite for the Musical Society was an advertisement for the premiere of the complete ballet in December 1892.

In January 1890, Petipa and Tchaikovsky created the masterpiece of Russian ballet, The Sleeping Beauty. The Nutcracker may have also been a masterpiece if the two men had worked on it together, but during the earliest rehearsals Petipa fell ill and his assistant Lev Ivanov was given the task of choreographing the ballet.

Ivanov was a shy, unambitious man content with being another's assistant. He was a gifted musician, and more than competent to choreograph The Nutcracker. His masterpiece in The Nutcracker was the "Waltz of the Snowflakes". Here, 60 dancers dressed in white with white ornaments on their heads danced in circles, squares, stars, and other geometric shapes to create the effect and feeling of being lost in a snowstorm.

The ballet was first performed at the Mariinsky Theatre in St Petersburg, Russia on Sunday 18 December 1892. Stanislava Belinskaya danced the part of Clara, Antonietta Dell'Era danced the Sugar Plum Fairy, and Pavel Gerdt danced the part of Prince Coqueluche. Riccardo Drigo directed the orchestra. The production was splendid; Tchaikovsky wrote that its splendors wearied his eyes.

First performance with Sergei Legat as the Nutcracker, Stanislava Stanislavovna Belinskaya as Clara, and an unidentified child (center) as a Gingerbread Boy

Despite its splendor, the ballet was not a great success. Some people liked it; others did not. Most complainers disliked the horde of little children in the ballet, and the chaotic battle of the toys and mice. 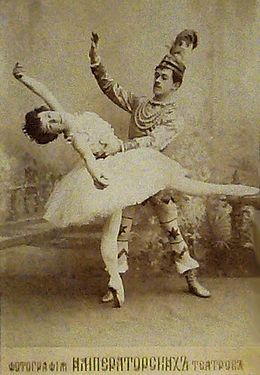 The Sugar Plum Fairy and Prince Coqueluche in the Grand pas de deux in the original production of The Nutcracker at the Mariinsky Theatre, St Petersburg, about 1900

The Nutcracker was a Christmas entertainment, and closed at the Mariinsky Theatre in January 1893. It continued to be played in succeeding years, but the ballet was forgotten when the Russian Revolution swept the country in 1917. Russian dancers moved to western Europe to escape the hardships and lack of work in Russia as the Revolution worsened. It was these dancers who revived the ballet to the best of their recollections in western Europe. Excerpts from the ballet were performed now and then, but the first complete Nutcracker was not performed in London until 1934.

Walt Disney and George Balanchine are credited with bringing the ballet to the attention of Americans. Disney used some of the music in his animated movie, Fantasia in the 1940s. Balanchine televised his production of the ballet from New York City in the late 1950s.

The ballet has been filmed and televised many times. In the late 20th century, a "Nutcracker industry" sprang up with toys, clothing, books, and other products manufactured and sold in theatres before performances.

The Nutcracker is performed throughout the modern world. For small regional ballet companies, The Nutcracker makes enough money for the companies to pay their bills and plan another season.