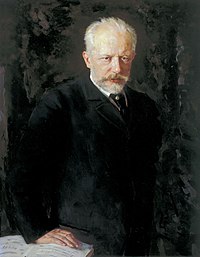 Pyotr Ilyich Tchaikovsky (1840-1893) was a Russian composer. He is best known for his six symphonies (especially the "Pathetique"), his two piano concertos, and his violin concerto. He also composed three ballets (Swan Lake, The Sleeping Beauty, and The Nutcracker), and two great operas Eugene Onegin and The Queen of Spades. He also wrote the 1812 Overture and the Romeo and Juliet Overture-Fantasy.

Tchaikovsky was gay and lived a life of great anxiety and distress in extremely repressive Czarist Russia. He died of cholera four days after conducting the premiere of the "Pathetique" Symphony in 1893. The police may have forced him to commit suicide because he was having a love affair with an aristocratic young man whose family did not want a scandal.