Odette and Prince Siegfried in a modern production

Swan Lake is a classical ballet based on German fairy tales. Pyotr Ilyich Tchaikovsky wrote the music. Julius Reisinger choreographed the first production. The ballet was first performed at the Bolshoi Theatre in Moscow, Russia on 20 February 1877. It was not a great success.

About 20 years after the Moscow premier, Swan Lake was revived in St Petersburg with choreography by Marius Petipa and Lev Ivanov. This time, the ballet was a huge success. Modern productions of Swan Lake are usually based on the Petipa-Ivanov version of 1895.

The Overture begins quietly with a theme called the Song of the Swans. It becomes louder, more intense, dramatic, and even threatening. Loud crashing chords in the brass are heard before the music subsides.

Set design for the first production in 1877

The curtain rises on an old castle in Germany. Prince Siegfried is celebrating his twenty-first birthday with friends.

The Prince's mother arrives. She tells her son he must choose a bride from six visiting princesses at a ball the next evening. She gives her son a beautiful crossbow as a birthday gift, then leaves.

The Prince does not look forward to marriage. As evening falls, his guests leave. A flock of swans flies overhead. The Prince takes his crossbow, and hurries away to hunt them.

At the edge of a lake, the Prince sees the swans land on the water. One comes ashore as a beautiful maiden. It is Odette.

Odette tells Siegfried she is a princess under a magic spell cast by the sorcerer Rothbart. She is a swan by day and a maiden by night.

Only a man who will promise to love her forever can break the spell. She will then become her true human self, and the sorcerer will die.

Siegfried has fallen in love with Odette. He makes the promise. Suddenly, Rothbart appears as an owl. He orders Odette to join her sister swans at the lake shore.

The following evening, the court assembles in the great hall. Prince Siegfried is expected to choose a bride. He shows little interest in the six princesses. He can think only of Odette.

Suddenly, Rothbart enters the hall with a maiden who looks exactly like Odette. It is Rothbart's daughter Odile. Prince Siegfried believes it is Odette. He chooses her as his bride.

Odette is seen at the window. She is weeping because Siegfried has broken his promise to love her forever. She disappears.

Rothbart and Odile hurry away, laughing at Siegfried's distress. A storm arises. Thunder is heard and lightning flashes at the window. Siegfried runs from the hall to find Odette.

Design for the final scene by Mikhail Bocharov, 1895

At the lake shore, the swan maidens grieve for Odette and her terrible loss. Siegfried rushes in to beg Odette's forgiveness.

She forgives him, but she must remain a swan forever. Rothbart enters and orders Odette away. She drowns herself in the lake. Rothbart dies.

The storm grows. The lake overflows its banks, and Siegfried is drowned in the flood. In the heavens, the clouds part. Odette and Siegfried are seen united in love at last. 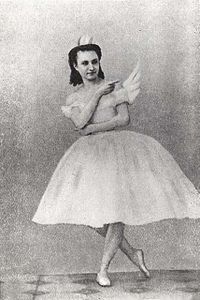 Anna Sobechshanskaya as Odette in the original production of Swan Lake, Moscow, 1877

The first performance was not a great success for several reasons: the principal ballerina was past her prime, the sets and dances were mediocre, and the music was conceived on a symphonic scale which the audience did not understand.

The principal role of the Swan Queen is one that all ballerinas want to perform. Like the role of Giselle, it is a test of a ballerina's technical, artistic, and dramatic powers.