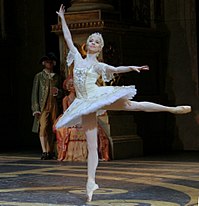 Ekaterina Krysanova in The Sleeping Beauty at the Bolshoi Theatre, 2012

The Sleeping Beauty is a classical ballet with music by Pyotr Ilyich Tchaikovsky and choreography by Marius Petipa. The ballet is based on a 1697 fairy tale by Charles Perrault. The Sleeping Beauty was first performed on 15 January 1890 in St Petersburg, Russia at the Mariinsky Theatre. It was a great success.

Story of the ballet[edit | edit source] 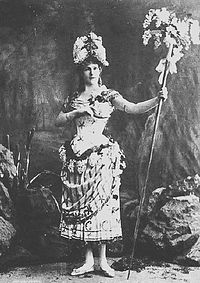 Marie Petipa as the Lilac Fairy, 1890

The curtain rises on the Great Hall of King Florestan's palace. The courtiers enter to a March. King Florestan and his Queen enter with their newborn daughter. The baby is to be baptized.

The six good fairies of the kingdom arrive to give their gifts to the baby princess. Before the Lilac Fairy can give her gift however, the Hall grows dark and thunder is heard.

An evil fairy named Carabosse enters the Hall in a carriage pulled by rats. She did not receive an invitation. To spite all, she puts a curse on the baby: the princess will prick her finger on the spindle of a spinning wheel on her sixteenth birthday and die.

The Lilac Fairy comes forward. She cannot break the curse but she can soften it. She says the princess will not die, but sleep for one hundred years. A prince will then waken her.

The courtiers assemble in the palace garden to celebrate Princess Aurora's sixteenth birthday. Four handsome princes enter. They are Aurora's suitors. Each prince presents Aurora with a rose.

Carabosse enters disguised as an old woman. She carries the spindle of a spinning wheel. Aurora has never seen one. She takes it from the old woman, and pricks her finger on the spindle. She falls into a deep sleep.

The courtiers carry the sleeping princess to a distant tower. The Lilac Fairy puts all the courtiers into a deep sleep. She then causes a great hedge of thorns to rise around the palace. This hedge will protect Aurora from intruders until a prince arrives to waken her.

The curtain rises on a clearing in a forest one hundred years after Aurora fell into a sleep. Prince Florimund enters with his friends. They have been hunting and need to rest. Refreshments are served, and the ladies begin several dances. All dance except the Prince. He is in a serious mood, and sends his friends away.

The Lilac Fairy enters to tell the Prince of the sleeping Princess. She causes the Princess to appear in a vision. The Prince and Princess dance together briefly, and the Princess then disappears.

The Prince declares his love and his wish to see the Princess again. A little boat appears on the river at the back of the stage. The Prince and the Lilac Fairy board the boat. It slowly crosses the stage.

The stage grows dark as the scene changes to the tower room where Aurora sleeps. The courtiers are also asleep and the room is filled with dust and cobwebs. The Prince enters, discovers the Princess, and wakes her with a kiss. There is great rejoicing.

Carlotta Brianza and Pavel Gerdt as the Princess Aurora and Prince Florimund in the first production, 1890

In the Great Hall, the marriage of Princess Aurora and Prince Florimund is being celebrated. Several dances are performed by Aurora's fairy tale friends. These friends include Red Riding Hood, Cinderella, Puss in Boots, and others.

Princess Aurora and Prince Florimund dance a pas de deux. The Lilac Fairy blesses the couple, and everyone dances happily.

In 1877, Tchaikovsky wrote the music for his first ballet, Swan Lake. It was performed in Moscow. Ballet music at that time was tuneful and "pretty", but Tchaikovsky wrote Swan Lake on a symphonic scale. Some thought it was too complex for a ballet. The conductor had trouble understanding the music, and the dancers had trouble following the music. The ballet was a modest success. 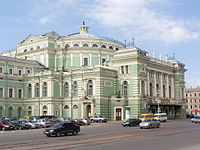 In 1889, Tchaikovsky was invited to write another ballet score. This time for the Mariinsky Ballet in St Petersburg. He was charmed with the scenario of the ballet, and accepted the invitation gladly. This ballet would become The Sleeping Beauty.

Tchaikovsky worked closely with Marius Petipa, the ballet's choreographer, while writing the music. Petipa would specify exactly how many measures of music he wanted for a certain dance or a certain scene, and Tchaikovsky would meet his specifications.

The music was completed, and the ballet was first performed in January 1890. It was another modest success, but in time, the ballet would be recognized as Tchaikovsky's masterpiece and a masterpiece of ballet.

Titles of all of the numbers listed here come from Marius Petipa's original scenario, as well as the original libretto and programs of the first production of 1890. Major changes which were made to the score for Petipa's original production are mentioned, and help explain why the score is often heard in different versions in theatres today.

All libretti and programs of works performed on the stages of the Imperial Theatres were titled in French, which was the official language of the Emperor's Court, as well as the language in which balletic terminology is derived.

No.18 Entr'acte symphonique (solo for violin composed for Leopold Auer, cut from the original production)

No.21 Marche
No.22 Grand polonaise dansée (a.k.a. The Procession of the Fairy Tales)
Grand divertissement—
No.23 Pas de quatre

a. Entrée (only the first eight bars were retained)
b. Grand adage