Velociraptor was a dinosaur of the Upper Cretaceous, about 75–71 million years ago.

Drawing of a vélociraptor (the colors are not real) 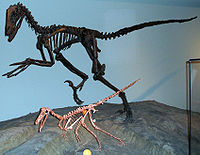 A Deinonychus fossil replica stands behind a Buitreraptor replica, at the Field Museum of Natural History in Chicago, Illinois.

The Velociraptor was about two meters long from nose to tail and 0.62 meters tall at the hip, which is somewhat bigger than the size of a turkey. It was slender, lightly built and weighed anywhere from 7-15 kilograms.

Velociraptor had feathers on its skin, the same as birds do today. These dinosaurs walked on two legs and had two hands with three fingers and sharp claws. Their heads were long and narrow like a crocodile, and had a mouth with 26 or more teeth which was able to close very quickly. On each foot, they had a large dangerous curved toe claw. Their claws could grow up to 5 inches long. Velociraptor had a stiff tail that it used for balance. The tail could only flex from side to side, not much up and down; this helped the dinosaur run fast and change directions quickly. Velociraptor had two legs which means it was bipedal. Its legs were strong and sturdy and it may have used them to jump. Velociraptors were also very agile.

Velociraptor was a carnivore. This means that it ate meat. It slashed or punctured its victims with its very long toe claw. Closely related dinosaurs like Deinonychus and Dromeosaurus hunted in packs and Velociraptor probably did too.

Alone a Velociraptor could have killed and eaten animals like lizards, early mammals and small or young dinosaurs. In a pack, Velociraptor may have hunted even larger prey such as Homocephale and even the large hadrosaurs!

One meal that was definitely on a Velociraptor’s menu was Protoceratops. Protoceratops was a plant-eating dinosaur that was a relative of Triceratops, but had no horns and was the size of a pig. Scientists have found a fossil of Velociraptor locked in a fight with a Protoceratops. The animals killed each other during the fight and a sand dune collapsed on top of them.

A Velociraptor and Protoceratops fossilized in a fight to the death.

In a group, Velociraptor could have quickly and quietly circled around an animal that was alone to trap it. Velociraptor hunted by separating a victim from the herd. They killed their prey by piercing its vital organs with their claws or teeth. Velociraptor would stalk up on their prey and pounce on it then it will slash through its prey with its claws and then eat it.

Velociraptors lived during the Late Cretaceous period, about 80 - 85 million years ago. This was only 15 million years before the dinosaurs became extinct. The world was much hotter than it is today, and there were no polar ice caps. There were small mammals and birds living at the same time as Velociraptor. There were flowering plants and many insects similar to the ones we see today.

Velociraptor lived in Asia. Fossils have been found in Russia, China and Mongolia. They lived in a place that was hot and covered by sand dunes. There were streams of water close to where some fossils have been found. They may have lived near the water and preyed on animals that came to drink. Some predators do this today.

The first Velociraptor was discovered by Paleontologist Henry Osborn in Mongolia in 1924. A Paleontologist is a scientist that studies dinosaurs. The first fossils found were a skull with jaws and some toes with a claw. The skull was found next to a Protoceratops skull. Paleontologists have found 12 different examples of the animal so far.

In a popular film called Jurassic Park,the Velociraptor did not look like it would have in real life. The movie's Velociraptors were twice as tall as they really were, they were scaly instead of feathered and their tails were too flexible. A real "Velocoraptor" was only the size of a Labrador Retriever. The Velociraptors in Jurassic Park look more like a Dromeosaur (Raptor) called Utahraptor, which was Velociraptor's much bigger cousin (which also had feathers).