From Vikidia, the encyclopedia for 8 to 13-year-old children that everybody can make better
(Redirected from Binomial nomenclature)
Jump to: navigation, search

A painting of Carolus Linnaeus wearing the clothing of Lapland, made by Hendrick Hollander in 1853.

It is made of Latin words or at least Latinized words that are not real Latin and may come from another language.

The person who popularized this system for use was Swedish botanist and physician Carolus Linnaeus (1707–1778)[1] who tried to name all things in the natural world and gave every species (animal, vegetable or mineral) that he knew a two-part name. This kind of naming had been used before Linnaeus, but before Linnaeus, almost nobody used binomial nomenclature. After Linnaeus, about everybody did. 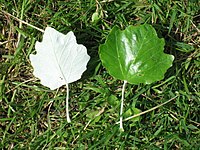 under- and upper surface of leaf of Populus alba

The value of the binomial nomenclature comes from its economy, its widespread use, and the uniqueness and stability of names in the system. The system replaced the use of Latin descriptive names, which were not handy as they were long (and growing all the time).

An important reason for the stability of names is that they need not be descriptive. For example, Simmondsia chinensis has the component chinensis which means "from China"; this was used in error, as the species is from California. Nevertheless, this name is used worldwide and is not to be 'corrected'. In today's system of naming, a name is just a label, and remains stable even if it is misdescriptive. Of course, ideally names should be descriptive; this makes it easier to remember them: Populus alba has leaves which are white underneath (alba means "white").

The components of a name may come from any source whatsoever. Often they are Latin words, but they may also come from Ancient Greek, from a place, from a person, a name from a local language, etc.

The names themselves are always treated grammatically as if they were a Latin sentence. This is why the name of a species is sometimes called its "Latin name," but scientists like calling these names scientific names.

The genus name must be unique inside each group of life. Species indicators need not be unique, but of course may not be used twice within the same genus.