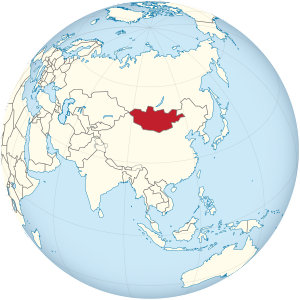 Location of Mongolia in Asia

Mongolia is a country in eastern Asia.

The Gobi Desert occupies the south part of the country.

In the Middle Ages, Mongolia was the centre of the Mongolian empire.

Afterwards Mongolia became a Chinese province. It achieved independence in 1911.

In 1924, Mongolia became a communist state after the Soviet Union model.

In 1992, democracy was introduced by a new constitution.