From Vikidia, the encyclopedia for 8 to 13-year-old children that everybody can make better
(Redirected from Winnie the Pooh)
Jump to: navigation, search 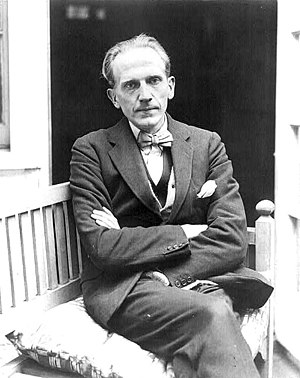 A. A. Milne wrote the two "Pooh" books

Winnie-the-Pooh is a children's book by A. A. Milne. It was published by Methuen & Co. Ltd. (London) in 1926. Pooh was followed by the sequel, The House at Pooh Corner in 1928. The chapters were written in such a way that they do not need to be read in order, as each is a separate episode and independent of the others. Ernest Shepard drew the pictures for both books.

Winnie-the-Pooh is about the adventures of a teddy bear called Winnie-the-Pooh and his friends Piglet, a small toy pig; Eeyore, a toy donkey; Owl, a live owl; and Rabbit, a live rabbit. The characters of Kanga, a toy kangaroo, and her son Roo are introduced later in the book, but the bouncy toy-tiger character of Tigger is not introduced until the sequel House.

Christopher Robin is the only human character in the books, and is based on Milne's son. He is the owner of the toys. The Pooh books are hugely popular, and have been made into movies several times, notably by Walt Disney. Shirley Temple hosted an episode of her television show, The Shirley Temple Show, in the early 1960s with the Bil Baird puppets and live actors. The books have been translated into several languages.