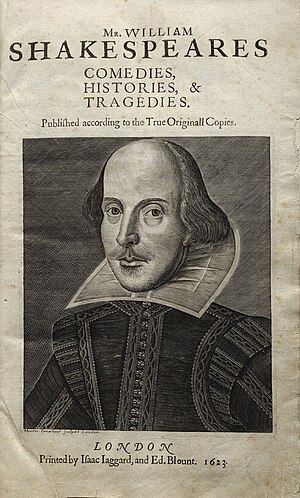 Title page of the First Folio of Shakespeare's plays

William Shakespeare was an English playwright and poet. He was baptized on 26 April 1564 in Stratford-upon-Avon, England, and died there on 23 April 1616. He married Anne Hathaway in Stratford at age 18, and sired three children upon her: Susannah, and twins Judith and Hamnet. Hamnet died as a boy. Tradition states that Shakespeare fled Stratford for London after being arrested for poaching on a nobleman's estate. There is no evidence to support this report.

Shakespeare spent most of his adult life in London acting and writing comedies and tragedies for the Globe and other theatres. Shakespeare also wrote many poems called sonnets, and other poems that include Venus and Adonis and The Rape of Lucrece

He retired to Stratford, bought a house called New Place, and died in Stratford in 1616. Shakespeare is buried beneath the floor of Trinity Church, Stratford. In 1623, all but two of his plays were collected in a volume now known as the First Folio. His resting place in Trinity Church is a major destination for fans and travelers.

Shakespeare's tragedies include Romeo and Juliet, Hamlet, Othello, King Lear, Macbeth, and Julius Caesar. His comedies include A Midsummer Night's Dream, The Merchant of Venice, Much Ado About Nothing, As You Like It, Twelfth Night, and The Tempest.[1]