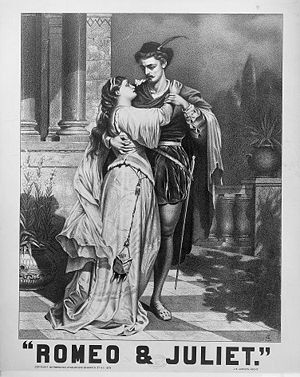 Romeo and Juliet is a play by William Shakespeare. It was probably written sometime between 1591 and 1595, and was probably first performed about the time of its completion.

The play tells of the secret love and marriage of two teenagers from feuding families. The two teenagers eventually kill themselves.

The play is famous for the Balcony Scene, the Queen Mab speech, and for its many memorable characters. These characters include not only Romeo and Juliet, but Juliet's nurse, her cousin Tybalt, Romeo's friend Mercutio, and Friar Laurence.

Great actresses have always wanted to play Juliet. Several movies, ballets, operas, and musical compositions have been based on the play. Leonard Bernstein's Broadway musical West Side Story is based on Shakespeare's play.