From Vikidia, the encyclopedia for 8 to 13-year-old children that everybody can make better
(Redirected from English)
Jump to: navigation, search 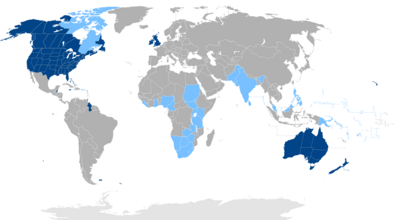 English is one of the most spoken languages in the world. More than 500 million people speak English. It is the language natively spoken by most people in the United Kingdom, United States, Canada, Ireland, Australia and New Zealand. It is also an official language

of India, the Philippines, Singapore, and many countries in sub-Saharan Africa, including South Africa although not in the whole of United States, United Kingdom and Australia.

The English alphabet uses 26 letters of the Latin alphabet.

The present English is the result of a series of intermixtures of many different languages. English has both Germanic and Latin origins.

The German elements comes from the Anglo-Saxon invasions and conquest in the 5th century. The Germanic dialects of these different Anglo-Saxon tribes became Old English.

Some Latin elements come from the Roman occupation from 55 B.C.E. to 407-410 C.E. Then, the Normand conquest in the 11th century brought many French elements. Normands stopped Old English from being taught in schools for a few hundred years. The language changed greatly, because it was mostly being spoken instead of written. The mixture of Old English and Latin elements became Middle English that was spoken until the middle/late 1400s. Nearly 60% of the English vocabulary comes from Latin.