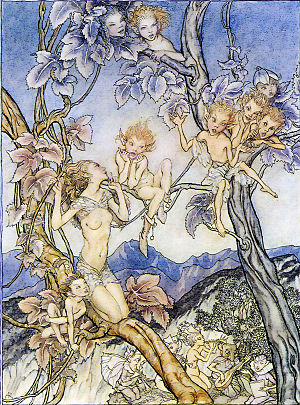 A Midsummer Night's Dream is a play by William Shakespeare. It is a comedy, and was probably written early in Shakespeare's theatrical career in London. The date the play was written is uncertain, but scholars believe that it was written some time between 1590 and 1596. The date of the play's first performance is unknown, but Dream was very likely staged shortly after its completion. Some authorities believe that the play was written to celebrate an aristocratic marriage, but there is no evidence to support this belief.

Shakespeare generally used the stories, plays, and historical accounts of other writers as sources for his plays, but A Midsummer Night's Dream is completely his own invention. He did however use English folklore to create the play's fairy world. He also used the ancient myth of Pyramus and Thisbe for the play within a play in Act V. The play has been adapted to movies, musical works, operas, and ballets.

Oberon and Titania, the King and Queen of the Fairies, and Puck, Oberon's mischief-making servant are a few characters in the play known to every schoolboy in the world. Bottom the weaver is one of Shakespeare's masterpieces of characterization. Well-known lines from the play include "The course of true love never did run smooth", "I know a bank where the wild thyme blows", and "Lord, what fools these mortals be!"

William Shakespeare was an English writer and poet. He was born in 1564 in Stratford-upon-Avon, England, and attended the grammar school there. He died there in 1616. He married Anne Hathaway in Stratford. They were the parents of three children: Judith, Susannah, and Hamnet.

Shakespeare spent most of his adult life in London writing 37 to 39 comedies, tragedies, and history plays for the Globe and other theatres. He also wrote a collection of short poems called sonnets and several longer poems. Some scholars have raised questions about Shakespeare's authorship of two or three plays.

He retired to Stratford and died there in 1623. He is buried beneath the floor of the parish church in Stratford. This gravesite is visited by thousands of people annually. Shortly after his death, Shakespeare's London friends collected his plays and poems, and published them in a large volume now called the First Folio.

The world's greatest actors, directors, composers, and designers have all been attracted to Shakespeare's plays. His works have been translated into dozens of languages, and have had tremendous influence upon the writers and poets who followed him.

The Globe Theatre was built in London in 1599 by Shakespeare's playing company, the Lord Chamberlain's Men. A fire destroyed the Globe on 29 June 1613. This fire was said to have started when the theatre's thatched roof was set ablaze by a cannon fired during a performance of Shakespeare's Henry VIII.

Many of Shakespeare's greatest plays were first performed in this theatre. A second Globe Theatre was built on the same site by June 1614. It closed in 1642. A modern reconstruction of the Globe, named "Shakespeare's Globe", opened in 1997 about 750 feet (230 metres) from the site of the original theatre.

Characters in the play[edit | edit source]

The Court of Theseus:

Sculpture of Bottom and Titania at the Folger Shakespeare Library in Washington, DC 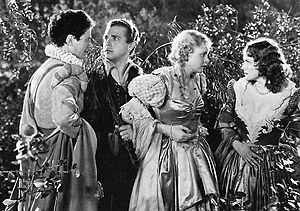 The setting is ancient Athens and a forest near it. The time is four days before Midsummer Day, May 1. Two young aristocrats, Lysander and Hermia, are in love, but Hermia's father wants her to marry a man named Demetrius. Hermia does not love Demetrius. Helena, Hermia's best friend, is in love with Demetrius, but Demetrius is not in love with her.

One night, Lysander and Hermia leave Athens quietly to seek shelter miles away with Lysander's aunt. Demetrius follows the two through the forest surrounding Athens. The lovesick Helena follows Demetrius. All four young people become lost and confused in the shadows of the forest.

Oberon and Titania, the King and Queen of the Fairies, have assembled their court in the forest. The two monarchs are quarreling. Titania stubbornly stands her ground in the quarrel, and the two part angrily. Oberon vows to take revenge on Titania for her stubbornness.

Oberon sees the lovelorn Helena, and takes pity on her. He orders Puck to put the magical juice of a flower on Demetrius' eyes. This juice will make him fall in love with Helena. Puck makes the mistake of putting the juice on Lysander's eyes, and he falls in love with Helena! Both young ladies are in great distress.

Adding to the confusion are a group of amateur actors from Athens. They have chosen the moonlit forest as the place to rehearse their play, but Puck gives Bottom, one of the actors, the head of a donkey. Titania falls in love with this man-donkey after Oberon puts the magic juice in her eyes. He was hoping she would return to loving him!

Oberon finally restores order. He causes Demetrius to fall in love with Helena, he causes Lysander to return to his sweetheart Hermia, he takes the donkey's head from Bottom, and finally he causes Titania to fall in love again with her royal husband. Dawn breaks, and the four young lovers return to Athens to be married. The amateur actors also return to Athens. Their play is performed at the wedding celebrations.

Title page from the 1692 edition of Purcell's Fairy-Queen

The play has always been very popular. Most productions staged the play as a spectacle with elaborate costumes and scenery. In the middle 19th century, the German composer Felix Mendelssohn wrote several pieces of orchestral music for the play including the popular concert piece, A Midsummer Night's Dream Overture and the famous Wedding March.

The play was the inspiration for Fairy-Queen, a 17th-century opera by Henry Purcell, and also a modern opera by Benjamin Britten. Modern ballets include those Frederick Ashton and George Balanchine.

In the 1935, Warner Bros. made a movie of A Midsummer Night's Dream. It was directed by Max Reinhardt and William Dieterle, and stars Ian Hunter, James Cagney, Mickey Rooney, Olivia de Havilland, Joe E. Brown, Dick Powell, and Victor Jory. Other movies were made in 1909, 1959, 1968, and 1999.