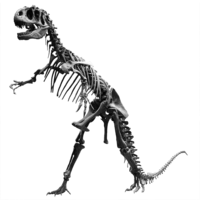 A dinosaur in the Jurassic period.

The Jurassic period was named after the Jura Mountains where rocks were first studied. In the Jurassic period, there was big landmass called the Pangea splitting up to North America, South America and the Atlantic Ocean was born.

In the Jurassic, the dinosaurs dominated the land fauna but they were not alone. Early mammals were mostly very small herbivores or insectivores and were not in competition with the larger reptiles.

The land of the Jurassic period was covered with trees, but flowering plants has not evolved yet. There were ferns, ginkgoes, Bennettitales or ‘cycadeoids’ and true cycads flourished in the Jurassic.

There was a massive climate change from the Triassic to theJurassic. The Jurassic was a lush, warm tropical climate just like a forest which helped the reptiles to thrive in that time. It also has humid and drippy subtropical feel to it.