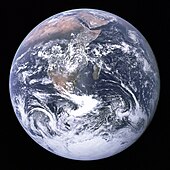 A color image of Earth as seen from Apollo 17. We can see Africa, Antarctica and the Indian Ocean

The Earth is our planet. At the moment, it's the only planet with life because it has a dense atmosphere of nitrogen and oxygen. The predominant color is the blue because it is three-quarters covered by oceans. It is believed to have formed about 4,600 million years ago.

The Earth is the third planet from the Sun in the Solar System. It is orbiting between Venus and Mars at an average distance of 149.6 millions km. The Earth also has one satellite, which is the Moon and has an equatorial diameter of 12,756 km across it.

The structure of the Earth[edit]

The inside of the Earth is separated in five layer:

Above the fifth layer of the Earth inner structure comes the atmosphere, whose density decreased with the altitude above the Earth surface.

The movements of the Earth[edit]

The Earth has two movements: it rotates around its axis and revolves along its orbit around the Sun.

Precession of the Earth

The millennial motions are the movement that is made in a very long time (ex: 1,000 years).

The internal motions (convective motions) is a type of transmission of energy in the fluids.

The Earth has one satellite, the Moon.