Gold is a yellow precious metal that is valued for its beauty and shine. Gold is softer than most other metals and can be formed into different shapes using simple tools and without fire or other heat. Because it can be found in clumps and is easy to work, it is believed to be the first metal that was used by humans. It has been used for making coins and jewellery for thousands of years. Today it is still used to make jewellery. Because it is a rare metal, it is a symbol of wealth. It is also used in electronic devices such as computers.

Gold does not "react" with many other chemicals. This means that it does not lose its shine, or rust, or burn, or explode. When ancient gold coins or jewellery are found, they look as shiny and beautiful as the day they were made.

Gold gets its English name from the Germanic word gulþa (meaning gold). The Old English word geolu means yellow. In Latin, gold was called aurum. That is why the chemical symbol for gold is Au. Gold is yellow and very expensive.

Where is it found?[edit | edit source]

Gold can sometimes be found above the ground in the sand and gravel bars of streams. Flakes and grains of gold that are trapped in rock come loose as the rock is broken up by the force of the water. The water then carries the gold downstream. When the stream slows down, the gold settles along with sand and gravel. People sometimes look for loose gold in streams, or in places where streams have once flowed. This is called "prospecting". A prospector often carries a wide pan, to scoop up the sand and gravel from the bottom of a stream and swish it around, looking for tiny flakes and nuggets of gold. This is called "panning for gold". 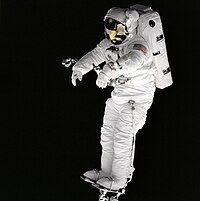 Gold is used to coat the visor of space suits in order to protect the astronaut's eyes from infrared radiation.

Shows the position of gold on the periodic chart.
Retrieved from "https://en.vikidia.org/w/index.php?title=Gold&oldid=110042"
Category: