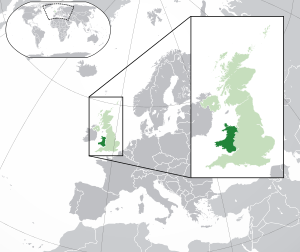 The location of Wales in Europe and in the United Kingdom.

Wales is a country which today is part of the United Kingdom. The capital of Wales is Cardiff. To the east of Wales is England, to the south is the Bristol Channel, to the west and to north is the Irish Sea. Cardiff is the biggest city, followed by Newport and Swansea. In 2011 Wales had 3.063.456 inhabitants.

Welsh and English are official languages in Wales. Welsh is spoken by around 20% of the people and is also taught in schools up until Year 11 (15-16 year olds). Welsh is a Celtic language, which came from the Brythonic family of languages.