An ancient farmhouse in Wales.

The Welsh language is the Celtic language of Wales that is still spoken throughout the country. Around 21% of the people of Wales (about 600,000 people), as well as some people outside Wales, can speak Welsh. Many people in Wales say they can understand some form of Welsh, such as spoken, written, or can read Welsh, even if they do not speak it all the time. Almost all Welsh people understand and can use the English language. Welsh is a compulsory subject for children in all schools in Wales, and it is taught as a second language in non-Welsh language schools. In Welsh, it is known as Cymraeg, or yr iaith Gymraeg, which means "the Welsh language" in Welsh.

Welsh has mutations. Mutations are when a sound (in speech) or a letter (in writing) changes at the start of a word. An example is the Welsh word "gwneud", which in English it means "to do", and "dod", which means "to come" "dewch i mewn" which means "come in". Sometimes the word changes from "gwneud" to "wneud", and from "dod" to "ddod". These sounds (in speech) or letters (in writing) changes also occur within, and at the end, of words, although the simplified classification found in ordinary books does not mention this.

Pronunciation of place-name by a Wales speaker. 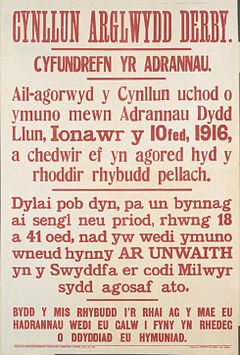 Poster in the Welsh language in 1915.

Informal Welsh is used when sending e-mails or sending text messages to your friends or family, and when talking with people you have known for a long time. Informal words and phrases use variations of "ti", meaning "you." Sometimes, people will ask you to call them "ti."

How to say things in Welsh[edit | edit source]

There are some sounds and letters that exist in Welsh but not in English, such as the letters (and sounds) ch and ll. The first sound is pronounced like the Scottish Loch Ness, and an example Welsh word that uses the 'ch' is "bach", which means "small." Ll is a voiceless 'l,' and is made by placing the tongue on the top of the top gum, and blowing. A Welsh word that uses the 'll' is "llan", which means "church." Both 'ch' and 'll' are single letters in the Welsh alphabet, along with 'dd,' 'ff,' 'ng,' 'ph,' 'rh,' and 'th.'

Here are some things to say in Welsh. How to say it is in brackets ().

Here are a few other words;

BBC Radio Cymru is a Welsh-language radio station that is available throughout Wales. Some local radio stations have some Welsh and English programs during the day.

The Welsh television channel, S4C, has been on air since 1982. It broadcasts shows such as the soap opera Pobol y Cwm, and children's programs such as Superted and Sam Tân (known as Fireman Sam in English).

The Welsh Alphabet has some extra letters that are not used in English, and does not have some others. Although certain letters do not exist in Welsh, they are used sometimes to make sounds that could not possibly be made otherwise. A good example is the word "garej" (meaning garage). The letter "j" does not exist in the Welsh language, and is a lend-word from English. The traditional word for "garage" in Welsh is modurdy, which means, "motor house". Another lend-word is "toiled," which means "toilet" in English. There are now many lend-words in spoken Welsh. Here is the Welsh alphabet;