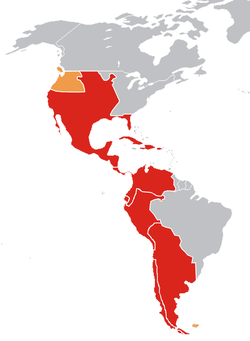 Spanish Empire in the 18th century

The Spanish Empire was one of the largest empires in history. It was the first to extend its power outside of Europe since the fall of the Roman Empire.[1] Spain became the leader in global exploration and in starting new colonies. They explored and laid claim to large territories in both North and South America.[2] Christopher Columbus made two voyages in the 1490s that became the start of the Spanish Empire. In the 50 years following Columbus' discoveries, there was a great deal of activity in the Americas. They were part exploration, part colonization and part conquest.[1] After the settlement of Hispaniola (now the Republic of Haiti and the Dominican Republic) in the early 1500s, they looked for new areas to colonize.[3]

The timeline of the Spanish Empire includes:[4]