Quebec (French: Québec) is a province in southeastern Canada. In 2014, it had 8,191,946 peoples, called Quebecois.[1] With an area of about 1 667 441 square kilometers, Quebec is the biggest of the ten provinces of Canada. It's also the only one whose the official language is French. The other ones are English-speaking (people speak English there) or even bilingual, like New Brunswick. There are many anglophone people in Quebec, mainly in Montreal. It is the second most populated province of Canada after its neighbour Ontario.

Quebec City is the provincial capital, but the biggest city is Montreal. Its motto is : "I remember".

Its motives are coming from the fact that Quebec is the only territory with a francophone majority in North America and it indicates a unique important culture. Given its economic strength ( among the 20 leading in the world according to the latest estimations) the sovereignists of Quebec believe that Quebec deservse to speak and act for itself on the international stage.

The Europeans arrived on the territory of Quebec in the XVth century. It was already inhabited by thousands of years by the Amerindians who were maybe remote descendants of people come from Asia. In his arrival in 1534, the explorer Jacques Cartier gained ownership of the territory in the name of France.

But many British also wanted to own land of the territory of Quebec. So there have been many wars and battles between the French and the British for the leadership. Finally the British took it in 1759. One of the most memorable battles took place on the Plains of Abraham, on September 13, 1759, two general opposing: Montcalm for the French and Wolf for the British. Both died after the battle: even today, one can see a monument in their memory on the Plains of Abraham This battle marked the start of the English Conquest and the end of French regime.

In terms of genealogy, the ten most popular names are (in order from most to least common): Tremblay, Gagnon, Roy, Côté, Bouchard, Gauthier, Morin, Lavoie, Fortin and Gagné.

In this province, there is a metropolis of Montreal, which is the largest city. 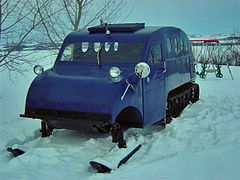 There are four seasons in Quebec : spring, summer, autumn and winter. Spring is the most important season in Quebec, because all the living things return to their normal lives; autumn is a season filled with majestic colors, such as orange, red, green, and yellow; winters are very cold and summers very nice. The winter of 2010 was the warmest in 60 years. But in 2007-2008, Quebec established a record with more than 5 meters of snow.

Quebec is divided in 17 regions :

The exploitations of natural resources is very important in Quebec. The development of potential hydroelectric has allowed to create many jobs. After the great hydroelectric center at the north coast, Hydro-Quebec built dams on the Grande Rivière, near the James bay, around 1980. Hydro-Quebec exports its excess electricity to the United States.

In 1980, copper, zinc, gold and silver mines were operational. The pulp paper industry employs many workers in several regions of Quebec.

The milk production dominated the agriculture in 1980, it represented the 33% of the revenues. The production of porc takes 20% and that of poultry and eggs 13%.