From Vikidia, the encyclopedia for 8 to 13-year-old children that everybody can make better
(Redirected from Quebec City)
Jump to: navigation, search

Quebec bridge, over the river Saint-Laurent

Quebec (in French: Québec), or Vielle-capital (old capital), is a city in Canada. It is the capital of Quebec province and its second biggest city. It is also the fourth most economically prosperous Canadian city. The city name: Quebec, comes from the Algonquin word Kebec, which means "the river narrows". The harbour of Quebec is the third most important in Canada. Quebec has many libraries but the main one is the Gabrielle-Roy Library.[1] The Frontenac Castle is situated in Quebec and is the most photographed hotel in the world.

The founder of Quebec City was Samuel de Champlain. He built the city on July 3, 1608. In 2008 Quebec celebrated its 400th anniversary. It is here that the Laval University, the oldest French-speaking university of North America, is located. 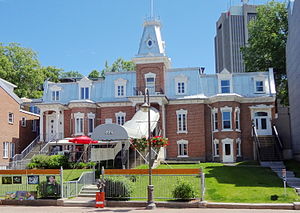 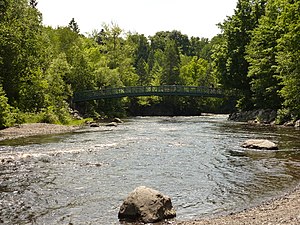 The Saint-Charles river in Chauveau park