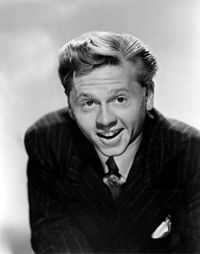 Mickey Rooney (1920-2014) was an American actor, singer, and dancer. His career in entertainment spanned 93 years. He is best known as the teenage Andy Hardy in several movies with Judy Garland, and for his appearances in The Family Channel's The Adventures of the Black Stallion in 1990.

Rooney was born Joseph Yule, Jr. in Brooklyn, New York, to vaudeville performers Joseph Yule and Nellie Carter on September 23, 1920. He was a toddler when he began performing on stage with his parents.

When his parents separated in 1924, his mother took him to Hollywood. He played Mickey McGuire in 78 comedy shorts. In 1934, he began using Mickey Rooney as his stage name. That same year, he signed with MGM and was cast as Andy Hardy. He would play the character in 13 movies.

Rooney's dramatic breakthrough-role was Whitey Marsh in 1938's Boys Town. It opened shortly before his 18th birthday. Rooney was awarded a special Juvenile Academy Award in 1939. He was named the biggest box-office draw in 1939, 1940 and 1941.

In 1944, Rooney enlisted in the United States Army. He entertained the troops in America and Europe. He was awarded the Bronze Star Medal for entertaining troops in combat zones. After the war, his career took a nose-dive.

Rooney tried a variety of entertainment options, but a friend said that finding work for 5 foot 3 performer was not easy. Rooney made countless appearances in TV sitcoms and television movies. He also lent his voice to many animated movies. In 1962 Rooney declared bankruptcy.

Rooney was awarded an Academy Juvenile Award in 1938, and in 1983 the Academy of Motion Picture Arts and Sciences voted him their Academy Honorary Award for his lifetime of achievement.

Rooney died surrounded by his family at his home in North Hollywood, Los Angeles, California, on April 6, 2014, at the age of 93. Rooney was survived by his wife of 37 years, Jan Chamberlain, as well as eight surviving children, two stepchildren, nineteen grandchildren, and several great-grandchildren.