T. rex from outside the Senckenberg Museum in Germany

Tyrannosaurus rex, or T. rex for short, was a dinosaur that lived on Earth about 65 to 70 million years ago, during the Cretaceous period. T. rex is one of the largest carnivorous (meat-eating) dinosaurs ever discovered. It is also quite likely the best-known dinosaur of all. 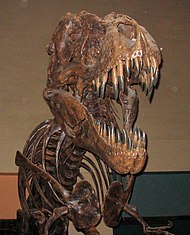 T. rex skeleton from the Smithsonian Museum of Natural History

Tyrannosaurus rex was up to 13 meters long and 5 meters tall, and weighed 4 to 6 tons – longer than a bus, and heavier than an elephant. It had a forward tilt, deep jaws, huge teeth, a long tail, and tiny arms (also known as forelimbs). T. rex's jaw alone was about 1.3 meters long and had fifty to sixty bone-crunching teeth that were up to 10 centimeters or 6 inches long. Its arms were very stubby, no longer than a human being's. They were very strong, able to lift up to two hundred kilograms, but were not long enough to touch each other! T. rex stood on two powerful hind legs, each ending with a three-toed foot, resembling a bird's foot, only much larger.

What did they eat?[edit | edit source]

T. rex was a very big meat-eating dinosaur, also called a carnivore. It would have been at the top of the food chain. It is known to have fed on other large dinosaurs, such as Edmontosaurus, Anatosaurus, and Triceratops, and probably could have swallowed smaller dinosaurs in a single bite.

One scientist believes that T. rex was a scavenger (an animal that eats already dead animals). He argues that it might not have been fast enough to catch prey. Other scientists believe that T. rex probably scavenged and hunted, like most living meat-eaters (such as tigers and lions). T. rex bite marks found on the bones of Edmontosaurus and Triceratops that have healed show that Tyrannosaurus did hunt at least some of the time – and also that its prey was sometimes lucky enough to escape.

One thing that T. rex did not eat was people. People didn't appear on Earth until over 60 million years later, much too late for anyone ever to be afraid of being hunted down by a T. rex.

We don't know whether T. rex was just a scavenger or a scavenger and a hunter. There are very few hunting animals that will not scavenge, and very few scavengers which never hunt.

Tyrannosaurus lived about 65 to 70 million years ago, in the late Cretaceous Period. T. rex was among the last of the big dinosaurs. Like all non-bird dinosaurs, T. rex lived in the Mesozoic era.

Tyrannosaurus is believed to have lived in forests, near rivers, and in areas that were open and full of prey. Mild seasons would have been most favourable to it. Tyrannosaurus fossils have been found in western North America and possibly Asia. 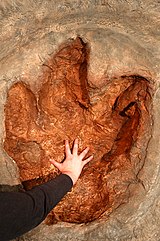 T. rex footprint at a museum