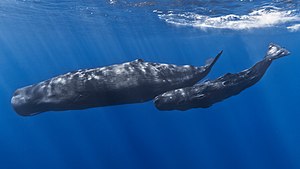 The sperm whale (scientific name : Physeter macrocephalus) is the largest of the toothed whales and the largest toothed predator. Mature males average 16 metres (52 ft) in length but some may reach 20.5 metres (67 ft), with the head representing up to one-third of the animal's length.

The sperm whale feeds primarily on squid, plunging up to 2,250 metres (7,380 ft) for prey. The sperm whale is one of the deepest diving of all sea creatures. The sperm whale communicates with a clicking vocalization. This form of echolocation and communication may be as loud as 230 decibels (re 1 µPa at 1 m) underwater. They are the loudest sound produced by any animal. It has the largest brain of any animal on Earth. Sperm whales can live for more than 60 years.

The sperm whale can be found anywhere in the open ocean. Females and young males live together in groups. Mature males live solitary lives outside of the mating season. The females cooperate to protect and nurse their young. Females give birth every four to twenty years. They care for the calves for more than a decade. A mature sperm whale has few natural predators. Calves and weakened adults are taken by pods of orca whales.

In the past, the sperm whale was a prime target of whalers. The head of the whale contains a liquid wax called spermaceti, from which the whale derives its name. Spermaceti was used in lubricants, oil lamps, and candles. Ambergris, a waste product from the whale's digestive system, is still used as a fixative in perfumes. Occasionally the sperm whale's great size allowed it to defend itself effectively against whalers. 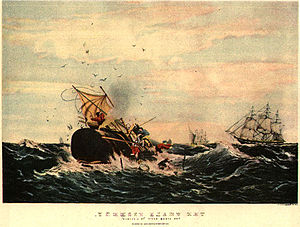 In the nineteenth century, sperm whales were hunted using rowboats and hand-thrown harpoons, a rather dangerous method as the whales sometimes fought back. This is a painting of a sperm whale destroying a boat, with other boats in the background.

The number of sperm whales throughout the world is unknown, but is thought to be in the hundreds of thousands. The conservation outlook is brighter than for many other whales. Historically, Japan has taken ten sperm whales a year, and until 2006 tens of these whales were hunted off Indonesia. They are protected practically worldwide, and commercial whaling has ceased.

Herman Melville's novel Moby-Dick is based on a true story about a sperm whale that attacked and sank the whaleship Essex. Melville associated the sperm whale with the Bible's Leviathan. The fearsome reputation perpetuated by Melville was based on bull whales' ability to fiercely defend themselves from attacks by early whalers, occasionally resulting in the destruction of the whaling ships.