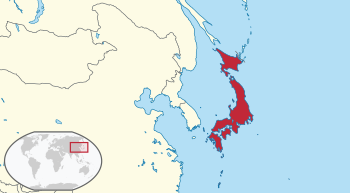 Location of Japan in Asia

Japan is a country and an island in Asia. Japan is a curved chain of over 4,000 islands in the Pacific Ocean. To the west, Korea juts out from northern China.

Tokyo is the populous capital of Japan, is a city that mixes traditional and ultramodern elements. Has the about the same latitude as Los Angeles. The average maximum temperature is 30.8 in August.

The most widespread religions in Japan are not many, in fact, there are only three:

The Shintoism considers the sacred nature, the ancestors but also the figure of the imperator, that he hasn't authority, but he symbolize the population.

The major language is Japanese. Like chinese, the Japanese is with ideograms, too.  It's very difficult to learn because there are a lot of characters and there are many syllables to know.

In Japan there is a multiparty democracy and it's a unitary state.

The currency in Japan is the Yen. the pronunciation is “en” but in Italy and in other places we call that “yen”, how to spell. The value of the Yen is very low. 1 euro equals 130 yen.