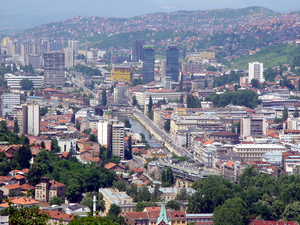 The centre of Sarajevo

Sarajevo is the capital and largest city of Bosnia and Herzegovina. Sarajevo has ~350,000 inhabitants, and the urban area has more than ~700,000. Sarajevo, famous for diversity, is also called "the Jerusalem of Europe". Sarajevo is the place where Archduke Franz Ferdinand of Austria was murdered in 1914. This was the "casus belli" (an event that caused war) of the World War I. The city was founded in 1461 by the Ottomans.