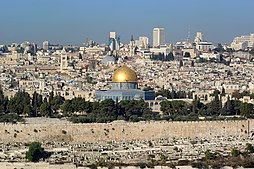 Jerusalem (in Hebrew: ירושלים) is a city in the Middle East. It is about 4,800 years old. Jerusalem is claimed by two countries as their capital: the State of Israel and the State of Palestine. It is a holy city for the Jewish religion from biblical times and the location of the Temple, and consequently important to the later religions of Christianity and Islam.

The city of Jerusalem was founded most likely by the Canaanites, who lost it to the Jews in their conquest of Canaan.[1] It became the capital of the nation of Judah, and continued to be the capital after Judah broke into Judah and Israel.[2] Much of the city had been improved by King Solomon, who constructed a large temple considered by some to be the most important temple of the Jewish religion and the world.[3]

Jerusalem was sacked by the Babylonians in their conquest of Judah, and much of it was destroyed.[4] It was returned to the Jews by the Persians, and later made a part of Alexander the Great's empire, and even later part of the Roman Empire.[5] During the Roman Empire, it was an important city for the Jews, and Jesus conducted many ministries there.[6]

After the end of World War I, the League of Nations mandates France and Great Britain to administer the Arabic regions of the defeated Ottoman Empire: Syria and Lebanon are then under French mandate; Palestine, Transjordan and Iraq are under British mandate. Jerusalem was then the capital of the British Mandate of Palestine, from its establishment in 1920 until its end in 1948.

When preparing the expiry of the British Mandate of Palestine, the United Nations voted the so-called Partition Plan for Palestine in 1947 recommending the creation of two independent states, a Jewish one and an Arab one. A small territory including Jerusalem and Bethlehem would bear special international status for another 10 years before its population would decide on its destiny. Shortly after this decision, civil war broke out in Palestine and the UN plan was never implemented.

When the British mandate actually expired mid May 1948, the Jewish State of Israel was immediately created and started conquer territory. An Arab state wasn't created; neighbouring countries opposed Israeli in what's called the 1948 Arab–Israeli War. Within about ten months, Israel conquered a big part of the country, including part of Jerusalem (which would then be known as West Jerusalem). Jordan took control on the Eastern part of the country and the remaining part of Jerusalem (becoming known as East Jerusalem), including the old walled city.

During the Six-Days War in 1967, Israel conquered East Jerusalem.

Today, Israel considers Jerusalem as its capital but the international community doesn't recognize this status as legitimate because the Eastern part of the city was annexed illegally: it considers the status of Jerusalem to be agreed between parties as part of the resolution of the whole Israel-Palestine conflict. Indeed, Palestinians also consider Jerusalem as the capital of their State, although they say they would be open to a solution where Jerusalem would have a special status.