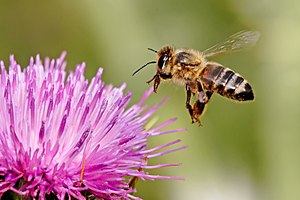 Honey bee landing on a thistle

A bee is an insect. Bees live in a hive in large groups called a swarm. In the swarm, every bee as a distinct role. The queen bee is the only bee that lays eggs. All of the bees in the swarm are her daughters, and are sisters to one another. Despite her name, the queen doesn't rule the swarm. The swarm has no true leader. Every bee in the hive knows what job it has to do.