Honey bee landing on a thistle.

The honey bee is an insect. Bees live in large colonies in natural or man-made beehives. The heart of the colony is the queen, the only bee that lays eggs. All of the bees in the colony are her daughters, and are sisters to one another.

The bees gather nectar from flowers. Bees also collect flower pollen. In the hive, bees turn the nectar to honey, and feed the larvae with the pollen. Honey is stocked and pollen may also be kept in the hive to feed the larvae in time of bad weather.

The honey bee is one of the most common domesticated insects (with the silkworm). It is bred for its honey and its wax. Farmers sometimes keep several hives near orchards. The bees help pollinate the blossoms of the fruit trees. Honey bee is a best example show in nature for social behavior

This bee is collecting pollen from a flower. The white lump on its hind leg is the pollen that it has collected.

Bees are flying insects with two pairs of transparent wings. Honey bees are the most well-known kind of bee. They live in colonies and make honey. Honey bees have a hairy striped body. Each pair of a honey bee's legs is designed for certain tasks like cleaning antennae, carrying pollen, or picking wax made by their body. The mouth is suited for chewing solid food like pollen and for lapping up liquids like nectar.

Honey bees belong to the genus Apis. The most widespread species is Apis mellifera, called the western honey bee or European honey bee though it originate in west Asia, Europe and Africa. It was introduced by men in America and Australia.

They're are other honey bee species : 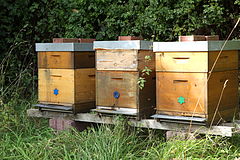 Bees make their own nests using wax, propolis, plant parts, mud etc. The wild nests are often built in holes bored into wood, in underground tunnels, or in cracks and crevices in buildings. Some Asian bees can make their hives in the open on trees and shrubs.

Honeybees are social insects and have large colonies. They live in hives made of wax and propolis which they make from plant resins and sap. Female worker bees secrete the wax they use (beeswax) from glands in their abdomen.

What does it eat?[edit | edit source] 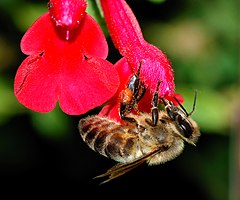 Honey bee on a flower.

Bees eat nectar and pollen as their primary food. Pollen is a source of protein for growing larva that helps to build body parts and honey or nectar can be sufficient to provide energy for adults bees in winter.

In the three jobs of the honey bee, there are queen, worker and drone bees. These different types of bees are called "castes." The main food differs for each caste. The queen and the growing larva are fed with a liquid called royal jelly that is secreted by the worker bees. As a honey bee grows, its food changes from royal jelly to pollen and nectar. The adult workers feed mostly on nectar and honey. Honey bees convert nectar into honey and store it for times like winter when nectar and pollen are not available.

The stinger left in the victim's body is an alarm signal to the colony. Once it stings, it releases a chemical called pheromones. This attracts other bees in the colony to sting the victim.

Some subspecies, like the africanized bee, are more irritable. These bees are present in North and South America. It is a good idea not to go near a bee colony unless one is has a good knowledge of handling bees. Often it is difficult to tell the difference africanized bees and domesticated bees in the wild.

Honeybee larva in a hive.

Bees are insects that have all the four stages of metamorphosis. A bee's life cycle includes egg, larva, pupa and adult stages.

The eggs hatch by the third day after laying or within a few days. When the eggs hatch, they become larvae and can develop into an either a queen or worker. During the larval stage growth rate is high and hence larvae are hungry and eat a lot. Adult bees take care of the larvae by feeding them and keeping them warm. The larval stage lasts for a week or two, after which larvae enter the dormant pupal stage. The pupal stage lasts for anywhere from a week to a couple of weeks. Larvae and Pupae are housed in special cells prepared by adult bees made of wax. Larvae do not forage on their own and require parental care to survive.

The colony's life cycle includes swarming, when about half of the bees of a colony leave the hive to look for a new place and create a new colony.

What special behavior does it exhibit?[edit | edit source]

A honeycomb in a beehive.

The majority of bees in a honey bee colony are female worker bees. Usually, they cannot lay eggs unless the queen dies. Every bee has a distinct role, depending on her age and on the needs of the season. Some bees stay in the hive, they feed the queen, drones and the young larvae. They also build, maintain and defend the hive. Other bees venture outside the hive to search for food. They forage for nectar, and make nectar into honey. Honey bees also collect and store pollen in special cells for reserve food. The pollen appears as two colored balls on a bee's back legs.

A major activity of worker bees in a honeybee colony is preparation of honey. The worker bees lap up nectar (which is water like in consistency) from flowers and other plant parts. They store the nectar in their stomach until they return to their hive. In the bee's stomach water is removed from the nectar to concentrate and thicken the nectar. Some digestive juices also mix with the nectar. When the bee returns to the hive, the concentrated nectar is regurgitated into special honey storing cells. The nectar becomes thicker by evaporation. When needed, the worker bees beat their wings to create an air flow in the hive. This is called fanning. When nectar in the cells reaches the required thickness it is called honey and the cells are sealed with wax by the bees.

Bees, like most insects, communicate using chemical signals called pheromones. In addition to this, honey bees also communicate by movement inside the hive. This is called bee dance. The communication by bee dance is symbolic and is thought to convey the direction and distance of a food source from the hive.

Beekeeping is raising and caring bee-hives to produce honey and other products. Honey may be taken from honey bee colonies in the wild in some country and more typically from colonies that are reared in apiaries (bee farms). Honey is the major apiary product. In addition to it, a beekeeper may harvest and sell pollen, bee's wax, propolis and royal jelly.

Bees are very important pollinators and improve productivity in crops. They are often reared by farmers to enhance crop productivity by proper pollination.

There are other families of bees, though. These other types of bees are different from honey bees in look, feeding, and nesting habits. Many are solitary. There are bumble bees, mining bees, leaf cutter bees, mason bees, digger bees, carpenter bees and many others. These other types of bees are common but aren't as familiar as honey bees. Some species of leaf cutter bees and wood borer bees are household or garden pests that eat plant parts like leaves and flowers, or bore into wooden articles in the house hold. A few bee species that do not have stingers bite using the mandibles. Mandibles are mouth parts of the insect that are using for cutting and chewing. The scientific name for all bees is Apoidea.

Bees should not be confused with wasps, their relatives. Wasps usually have a yellow and black striped body while bees more often have a grey and brownish striped body. Bees look more "hairy". Bees, wasps, hornets and ants belong to a common insect order Hymenoptera. All these insects have transparent wings and share a similar anatomy.