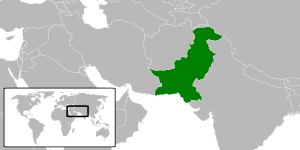 Location of Pakistan in Asia

Pakistan (Urdu: پاکستان) is a country in South Asia. It has India in the east, China in the north, Afghanistan in the west, Iran in the south-west and Arabian sea in the south.

The word "Pakistan" is made up of two words; "Pak" and "stan". The word Pak means "pure", and the suffix -stan means "land of".

Pakistan is located in south Asia. It borders with Afghanistan on the west, with Chine on the north, India on the east, Arabic Sea on the south and with Iran on the south-east.

Pakistan has a continental type of climate, but it receives variations of temperatures , both seasonally and daily.

WINTER: Cold Foggy Snowfall in northern regions and in Balochistan

Balochistan is a semi-desert area, with greenry in some parts. It is a Plateu, and mountains can reach about 2,000 meters above sea level.

Khayber Pakhtoon Khwa, often shortened to KPK, is a provience in western Pakistan, which is boardering Afghanistan in west.

Pakistan became independent from India on the 14 august 1947 with the guidance of the politician Mohammed Ali Jinnah also referred as Quaid-e-Azam. Because he played a huge role in Pakistan’s fight for independence he obtained the deserved the title of “ father of the nation”. He sadly died a year after reaching his goal, his death was caused by tuberculosis on the 11 September. Every year Pakistan celebrates his birthday (25 dicember 1876).

Urdu is the official language of Pakistan with English. Other most spoken languages of Pakistan are Punjabi Sindhi Balochi Pashto

INDEPENDENCE DAY (14 AUGUST) RAMADAM,the day of ramadam changes every year, it's a religious festivity,it consist of fasting from sunrise to sundown. It lasts for one month

EID-UL-FITAR: this day celebrates the end of ramadam, people pray in the morning and then family and friends gather at a house and have a big feast.

EID-UL-AZAA on this day people "slauther" a sheep, goat or cows as a sign of sacrifice to Allah, after this people organize a feast at their house for thir family and friends. DEFENCE DAY: Celebration of the day when India attacked Pakistan on the night of 6 September 1965 and Pakistan won . Still today the country celebrates its victory.

The most popular sport in Pakistan is Cricket, Almost all districts and neighborhoods in Pakistan have a cricket team and people start playing from a young age. Pakistan has won international cricket events, which include the 1992 Cricket World Cup, the 2009 ICC World Twenty20 and the 2017 ICC Champions Trophy besides finishing as runner-up in the 1999 Cricket World Cup and the 2007 ICC World Twenty20. Women's cricket is also very popular, with Kiran Baluch holding the current record of the highest score in a women's test match with her innings of 242. The Pakistan Cricket Board controls both the men's and women's games.