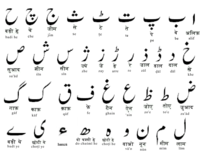 The Urdū alphabet, with names in the Devanāgarī and Latin alphabets.

Urdu is a language written in the Perso-Arabic Script, and has many letters common with Arabic and Persian. It is written from right to left. However, Urdu is often written in the Latin alphabet in text messaging and e-mails.

Urdu is widely spoken in Pakistan and India, though it also has large number of speakers in the Middle East, United Kingdom, and North America.

There are estimated to be about 60 and 70 million native speakers of Urdu. There were 52 million in India per the 2001 census, some 6% of the population approximately 10 million in Pakistan or 7.57% per the 1998 census and an additional 100 million people. who can speak it as a secondary language. It is also closely related to the language Hindi, and speakers of the everyday forms of the languages can usually understand each other.

Urdu is believed to have evolved from contact between the local Indo-Aryan (prakrith, a localized form of Sanskrit) speaking population and the people of the Persian/Arabic speaking nations who invaded and ruled the Indian sub-continent for almost 1000 years since the attacks of Ghaznavi in early 10th Century. Urdu evolved in the Indian sub-continent from various local dialects such as Prakrit and Brij Bhasha with outside influences from the Arabic, Persian, and Turkish languages.

A poem in Urdu[edit | edit source]

I had started all alone towards the destination but

People kept joining and it became a caravan.

(According to the Indian Urdu newspaper Pindar,

the couplet is by Majruh Sultan Puri.)