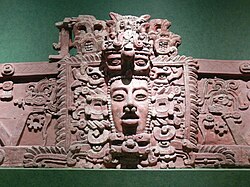 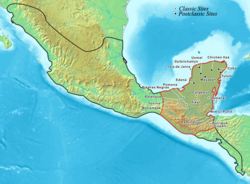 The Maya civilization was a group of people who lived in Central America. They lived there for a long time and some of the Maya people live there even today. They lived 4,000 years ago (about 2000 BC). The Maya people used a written language before Columbus came to the Americas in 1492 AD. They were good at art, building, and math. They knew about stars and planets, which helped them make calendars.

The Maya civilization was biggest between the years of 250 AD and 900 AD. The Maya civilization spread all the way from central Mexico to Honduras, Guatemala, and northern El Salvador. The Maya people traded with other people in the Americas. Their art and buildings have lots of different styles. This shows they traded a lot. They made changes to their buildings to make them better. The style in which they made their buildings was often similar to styles of buildings in countries that the Maya people (Mayans) traded with.

The Maya civilization started getting smaller after 900 AD.

The Spanish arrived in the 15th century and took over Central America, even in the Mayan areas. However, the Mayan people still live there today. Their relatives can be found in the same areas the Mayan civilization used to live in. They even keep the old Mayan traditions and beliefs. There are many Mayan languages still spoken today, including one called the Achi language. A play called Rabinal Achi is considered very important to the world.

The Maya civilization lived in three different areas: the southern Maya highlands, the central lowlands, and the northern lowlands. They had many different types of land, including mountains and dry plains. People living in the low plains by the sea were affected by hurricanes and tropical storms from the Caribbean.

The area covered what we now call the southern Mexican states of Chiapas and Tabasco, and the Yucatán Peninsula states of Quintana Roo, Campeche and Yucatán. They also included where we now call Guatemala, Belize, El Salvador and western Honduras.

The first Maya settlements started about 1800 BC. They lived in the Soconusco region, now the state of Chiapas in Mexico, on the Pacific Ocean. This is called the "Early pre-classic period" in Mayan history'.[1] People in Central America had been nomads who went from place to place to find food and shelter. Around this time they began to settle down.They started to farm animals and make pottery and small clay figures.[2] They buried their dead in simple burial mounds. Later they started to make these mounds into step pyramids.

There were other people around at the time, especially in the north. The Olmec, the Mixe-Zoque, and Zapotec civilizations mostly lived in the area we now call Oaxaca. We don't know exactly where the borders of the Maya civilization were. Many of the most important early examples of writing and buildings appeared in north, so these cultures probably affected the Maya civilization.[3] 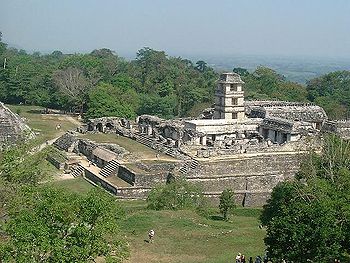 The ruins of Palenque

Like Ancient Greece, their civilization was made up of lots of cities, which all worked in different ways. People gathered around these cities to farm. Well-known cities were Tikal, Palenque, Copán and Calakmul. Lesser-known cities were Dos Pilas, Uaxactun, Altun Ha, and Bonampak, among others. In general, we know more about where the cities were in the south than we do in the north. Some northern cities we do know about were Oxkintok, Chunchucmil, and Uxmal.

Their most famous monuments are the pyramids they built as part of their religious centers, and the palaces. The palace at Cancuén is the largest we know about in the Maya area. The Maya also made carved stone slabs which they called tetun, or "tree-stones". These slabs show rulers along with hieroglyphic writing describing their family, military victories, and other things that they did well.[5]

Trade with other civilizations[edit | edit source]

The Maya had trade routes that ran over long distances. They traded with many other Mesoamerican cultures, such as Teotihuacan, the Zapotec, and other groups in central and gulf-coast Mexico. They also traded with groups that were farther away. For example, people who study the Maya civilization found gold from Panama in the Sacred well at Chichen Itza.[6]

Some important things they traded were cacao, salt, sea shells, jade and obsidian.

Between 900 AD and 1000 AD, the cities in the southern lowlands had more and more problems until all the people left. The Maya civilization there stopped making big monuments and carvings.[7] People who study the Maya civilization are not sure why this happened. They have many different ideas - some people think there was a big environmental disaster, or a disease affected a lot of people, or there were just too many people for the amount of food they could grow.

In the north, the Maya civilization kept going. Other cultures started mixing with Mayan culture much more. Some of the important sites in this time were Chichen Itza, Uxmal, Edzná, and Coba. At some point, the families who ruled over Chichen and Uxmal got weaker and the rulers in the city of Mayapan ruled all of the Mayan civilization in the Yucatán peninsula until there was a revolt in 1450.[8] After the revolt, the whole area broke up into different cities who fought against each other, until the area was conquered by the Spanish.

The Itza Maya, Ko'woj, and Yalain groups around what is now Guatamela were still around, but there weren't very many of them. By 1520, they had built themselves back up again and started to build cities. The Itza had their capital at Tayasal (also known as Noh Petén), and people who study the Maya civlisation think what's left of this city is below the modern city of Flores, Guatemala on Lake Petén Itzá. The Ko'woj had their capital at Zacpeten. Some Mayan cultures were still living in the southern highlands.

The Quiché kingdom produced the most famous Mayan work, the Popol Vuh. It talks about the creation of the world, the Mayan gods and goddesses, how humans and animals were created and why the Quiché kingdom was the best one in the Maya civilization.

The Spanish started to conquer Maya lands. It took them a long time (170 years) to finish doing this because the Mayans had no capital city and each city had a different culture. The last Mayan states, the Itza city of Tayasal and the Ko'woj city of Zacpeten, still had people living in them late into the 17th century. They were finally conquered in 1697.

There are still about 6 million Maya people living in Central America.