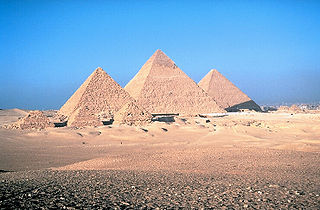 A pyramid is a structure, usually of stone, built in the shape of a pyramid. From ancient to modern times people in many different parts of the world have built such structures.

The word "pyramid" comes from the Greek word pyramis which meant "wheat cake." The ancient Egyptian word for them was something like "Mer".[1] The Great Pyramid of Giza was one of the Seven Wonders of the ancient world.

In Egypt, kings and queens, called Pharaohs, were buried in huge square-bottomed pyramids built of stone. They were usually built to be used as tombs for Pharaohs. The ancient Egyptian pyramids are very well built. Some of the pyramids still stand today.[2]

The oldest man-made pyramid found is called the Step pyramid. It is near Cairo, Egypt. It was built for King Djoser thousands of years ago. Later pyramids were built much larger. The largest one was the Great Pyramid of Giza. It was near Cairo. It was the tallest building in the world until the Eiffel Tower was built in Paris, in 1889. The Great Pyramid was built by the pharaoh Khufu (= Cheops) from the Ancient Egyptian Old Kingdom. It took twenty years to build.

People thought pyramids were built by slaves. More recently evidence suggests that the workers who built the pyramids were paid and well-cared for. They were loyal to the Pharaoh. Inside the Great Pyramid, some of the most famous man-made objects have been found from ancient times. There were once many valuable items buried with the dead Pharaohs, in the hope that they would take them to the afterlife. Pyramids usually had traps to stop thieves from escaping easily. Tomb thieves were punished by death if they were caught. However, by 1000 BC, many of the pyramids had been robbed of their precious treasures.

A large statue of a Sphinx stands near the pyramids at Giza. It has the body of a Lion and the head of a Pharaoh.

The ancient Greeks called the great pyramid one of the seven wonders of the world. There are over 100 pyramids in Egypt. Most of them can be found on the western side of the River Nile. Some Egyptologists have different opinions on why the ancient Egyptian Kings built pyramids as their tombs. Pyramids have been excavated for about the last 200 years.

The ancient Egyptians believed that the Egyptian pharaohs got launched into the stars to join their gods in the afterlife.

Pyramids in the Americas[edit | edit source] 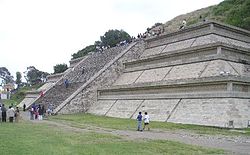 The Aztecs and Mayans also built many massive pyramids. None are as old or big as the oldest or biggest Egyptian pyramids. Most of them are step pyramids.

Unlike Egyptian pyramids, which were used as tombs for rulers and wealthy people, Aztec and Mayan pyramids are believed to have been used for public displays of human sacrifice. 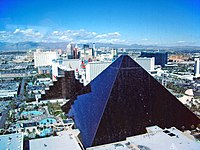 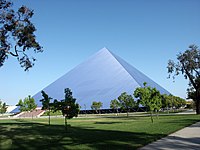 Oscar Niemeyer's design for a museum in Caracas

There are also ancient pyramids in other parts of Africa, Central America, Europe, North America, and Asia. There is a famous modern glass pyramid in front of the Louvre Museum in Paris. The Luxor Hotel, in Las Vegas, Nevada is also a glass pyramid.