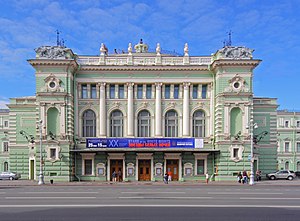 The Mariinsky Ballet (incorrectly, the Kirov Ballet) is a Russian ballet company. It is one of the most distinguished companies in the world. Its training school is Vaganova Ballet Academy.

The company is based at the Mariinsky Theatre in St Petersburg, Russia. It was founded in the 18th century, and was originally known as the Imperial Russian Ballet.

With the end of the Imperial era, the company was renamed the Kirov Ballet in 1934 after a Soviet assassination of the Bolshevik revolutionary Sergey Kirov. It is now the Mariinsky Theatre.