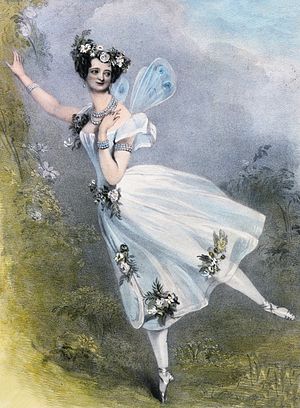 Taglioni in a hand colored print, about 1831

Marie Taglioni (23 April 1804 — 24 April 1884) was the first great romantic ballerina. She was famous for raising the hem of her billowing skirts to display her footwork. She was also the first ballerina to use pointe work in the service of art rather than acrobatics.

She was born in Sweden to choreographer Filippo Taglioni, and Swedish ballerina Sophie Karsten. Taglioni became famous when her father created La Sylphide for her Paris debut. This ballet was one of the first romantic ballets and one of the most influential ballets in the history of dance.

Taglioni danced in Paris, London, and St Petersburg. She was on the committee to reorganize the Paris Opéra Ballet. She retired from the stage in 1847. She thereafter taught social dance to children and ladies. She died in Marseille in 1884.