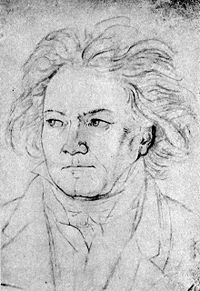 Ludwig van Beethoven was a German composer and pianist. He was born on 17 December 1770, and died on 26 March 1827. He wrote one opera, several masses, nine symphonies, seven concertos, 32 piano sonatas, string quartets, and many other works. The "Moonlight" sonata and the bagatelle "For Elise" are known around the world.

Beethoven was born in poverty in Bonn, Germany. He received his earliest musical instruction from his alcoholic father, and from Christian Gottlob Neefe, an organist who taught him composition.

When he was 22, Beethoven left Bonn for Vienna, Austria, the musical center of the German world. Beethoven wanted to study with Mozart. Mozart accepted him as a pupil, but the composer died before lessons could begin.

Beethoven became a pupil of Franz Joseph Haydn, but Haydn wanted Beethoven to compose in the Classical style. This style was becoming old-fashioned. Beethoven wanted to compose in the new Romantic style. The relationship between Haydn and Beethoven grew difficult, and ended when Haydn went to England for a year in 1795.

Beethoven began his career as a composer writing in the Classical style (as Haydn wished), but, by the early 1800s, he was successfully composing in the new and fashionable Romantic style. 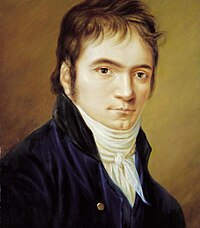 Beethoven started to lose his hearing about 1800. He left Vienna for a country village where he came to terms with his growing deafness. By 1814, he was completely deaf. He continued to compose with success, but no longer conducted or performed in public.

Beethoven's later years were made unhappy with money troubles, family deaths, growing slovenliness, and a young nephew named Karl. Karl had no musical talent, but Beethoven tried to make him a musician. Karl was very unhappy in his uncle's home, and tried to kill himself. He finally joined the Army.

Beethoven's last years were made bearable by studying the music of Johann Sebastian Bach and George Frideric Handel. The works of these two Baroque composers were being collected in complete editions for the first time.

Beethoven's last great works were composed during this study period and show the influences of Bach and Handel. These works include the Ninth Symphony ("Choral"), the Missa Solemnis, the Diabelli Variations, several string quartets, and the "Hammerklavier" piano sonata.

Beethoven was bedridden from various illnesses in his last months. He had many friends who cared for him and tried to ease his suffering.

Beethoven died on 26 May 1827. He was 56 years old. The cause of his death is uncertain, but an autopsy revealed his liver was damaged by the consumption of alcohol.

Beethoven's funeral procession on 29 May was attended by 20,000 people. He was buried in a cemetery northwest of Vienna. His remains were later moved to Vienna. 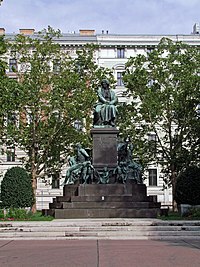 Beethoven is known worldwide for his nine symphonies, especially the third symphony ("Eroica"), the fifth symphony ("Fate"), the sixth symphony ("Pastoral"), and the ninth symphony ("Choral").

His violin concerto and his five piano concertos, especially the fifth ("Emperor"), are also known around the world.

Beethoven's only opera, Fidelio, is performed regularly in the major opera houses of the world. Music for the church includes several masses and the monumental, Missa Solemnis.

His 32 piano sonatas are performed in concert halls and by home pianists. Favorite sonatas include the "Moonlight" Sonata, the "Pathetique", and the "Appassionata".

Beethoven's string quartets and other chamber music are also played in concert halls and at home. His short and easy piano pieces, "For Elise", "Turkish March", "Rage Over a Lost Penny", and the Bagatelles are played by beginning piano students around the world.