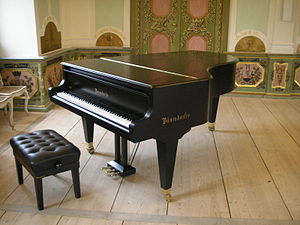 The piano (or pianoforte to give it its proper name) is a musical instrument with a keyboard. A normal piano has 88 keys. Pianos use the keys to move hammers that hit strings inside, making a sound. Pianos come in two basic shapes: grand pianos and upright pianos. The piano has been an extremely popular instrument in Western classical music since the late 18th century. A person who plays the piano is called a pianist.

The piano was invented by Bartolomeo Cristofori of Padua, Italy. He made his first piano in 1709. It developed from the clavichord which looks like a piano but the strings of a clavichord are hit by a small blade of metal called a “tangent” [1]. In the piano the strings are hit by a hammer. The early keyboarded instruments, such as the clavichords, harpsichords and organs that were used at that time, had a much shorter keyboard than they do today. Gradually the keyboard became longer until it had the 88 notes (7 octaves plus three notes) of the modern piano.

At first the instrument was called the “fortepiano”. This means “loud-soft” in Italian. It was given this name because it could be played either loudly or softly, depending on how hard the note was hit (the harpsichord could not do this, and the clavichord could only make a tiny difference between louder and softer). Later this name changed to “pianoforte”. This is normally shortened to “piano”. The word “fortepiano” is sometimes used to describe the pianos of the late 18th and early 19th centuries. In some languages, such as Russian, “fortepiano” is the normal word for a piano.

Although the piano was invented at the beginning of the 18th century, it was not until 50 years later that it started to become popular. The first time the piano was played in a public concert in London was in 1768 when it was played by Johann Christian Bach[2]. The upright piano was invented in 1800 by John Isaac Hawkings. Seven years later T. Southwell invented “overstringing”. This means that the strings for the low notes go diagonally across the soundboard so that they can be longer and make a much bigger sound.

The early pianos had strings that were fastened to a frame made of wood. They were not very heavy, but they were not very strong or loud, so they could not be heard very well in a big concert hall. In 1825 the cast-iron frame was invented in America. This made the piano much stronger so that it could make a bigger sound and the strings were not likely to break.

A piano has a keyboard with white keys and black keys. When a key is pressed down, the damper comes off the string and a hammer hits the string. It hits it very quickly and bounces off so that the string is free to vibrate and make a sound. When the player takes his finger off the key the damper falls back onto the string and the sound stops. The strings are stretched very tightly across the frame, passing over a bridge on the way. The bridge touches the soundboard. This means that the vibrations are sent to the soundboard. The soundboard is a very important part of the piano. If it is damaged the piano will not make a good sound.

The mechanism which makes the hammer bounce off the string very quickly is called the “escapement”. In 1821 Sebastian Erard invented a kind of double escapement. This made it possible to repeat the note very quickly. The hammer only touches the string for about one thousandth of a second. The hammers are covered with felt which is a mixture of wool, silk and hair.

The piano has two pedals. Larger pianos have three.

Once the piano became popular in the late 18th century many composers wrote music for the piano. Wolfgang Amadeus Mozart started to learn on harpsichords when he was very small, but the piano was becoming popular when he was a young man and he wrote many sonatas and concertos for the piano. Franz Joseph Haydn also wrote a lot of piano music. Ludwig van Beethoven was a very famous pianist before he became very famous as a composer. His piano compositions include 5 concertos and 32 sonatas. In the Romantic period many composers wrote for the piano. They include Franz Schubert, Robert Schumann, Johannes Brahms, Franz Liszt and Frédéric Chopin. Later composers include Sergei Rachmaninoff, Claude Debussy, Maurice Ravel, Sergei Prokofiev, Dmitri Shostakovich and Bela Bartok.

The piano has been a very popular instrument ever since the mid 18th century when it soon replaced the clavichord and the harpsichord. By the early 19th century the sound that the piano made was big enough to fill large concert halls. Smaller pianos were made for use in people’s homes. At first these included square pianos and giraffe pianos, later on the upright pianos became popular for home use. Pianos are not often used in orchestras (if they are, they are part of the percussion section). They may, however, be used for piano concertos (pieces for solo pianist accompanied by orchestra). There is a vast amount of music written for piano solo. The piano can also be used together with other instruments, in jazz groups, and for accompanying singing.

Pianists have to learn many things. It is important to sit comfortably with a straight back so that hands can reach all the keys. The hands should be shaped like a ball so that the fingers are curved. They should be able to control the sound they make with the weight of the arm and fingers. Lots of practice is needed to become a good pianist. Some people can play the piano very well “by ear”, but learning to read music helps a person to become a better pianist and musician. Playing the piano helps people to understand harmony because the piano can play chords.

Pianos need to be tuned regularly. A piano tuner is a person whose job it is to tune pianos.