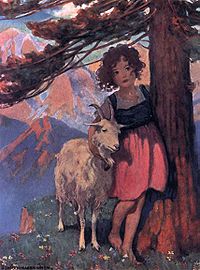 Heidi is a novel written by Johanna Spyri in 1880. The story is about a young orphan girl who grows up in the Alps in Switzerland, tending goats with her grandfather.

Heidi is one of the best-selling books ever written. It is also among the best-known works of German and Swiss literature. It has been adapted to movies and television programs many times.

When her guardians die, Heidi is sent to live in the mountains with her grandfather. Heidi helps him tend his goats and make cheese. She makes friends with everyone she meets.

Her grandfather is a grumpy old man who does not like people. He slowly changes and becomes more caring because of Heidi's love and gentleness.

One day, Heidi is taken to Frankfurt, Germany. There she becomes the companion of Clara, a disabled child of a wealthy father. Together, the children have good times.

Heidi becomes homesick, and a kind doctor says that she must return to her grandfather. Later, Clara visits Heidi in the Alps. She becomes strong enough to walk. 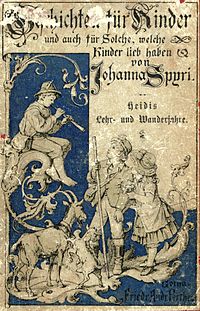 Heidi was a great success with both children and adults when it was published. The story is still popular. The book has been translated into more than 50 languages.

The story has been adapted to movies and television programs many times. In the United States, Shirley Temple was the first to play Heidi in the movies.

A 1968 television version created viewer distress when it pre-empted the last minute of an American football game. In this last minute, which television-viewers did not see, two touchdowns were scored. Football fans were furious. This game is referred to as the Heidi Bowl.