Temple in the Czech Republic, 1990

Shirley Temple (April 23, 1928 - February 10, 2014) was an American movie and television actress, singer, business woman, dancer and a diplomat. In her middle years, she became a United States ambassador, first to Ghana and then to the Czech Republic. She was also Chief of Protocol of the United States. 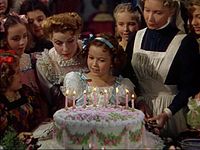 Temple (center) in her first color movie, The Little Princess (1939)

Temple was four years old when her movie career began in 1932. She appeared in a series of satirical short movies called Baby Burlesks. These short movies were produced by Educational Pictures. Like her child costars, Temple wore diapers fastened with huge safety pins while speaking adult dialogue. Educational Pictures went bankrupt in 1933. Temple then signed with Fox Pictures. She remained with Fox for the rest of her movie career.

In 1934, Temple became a household name after appearing in Bright Eyes. This movie was specifically designed for her talents. She won a special juvenile Academy Award for her 1934 movie performances. She was a superstar who made two or three movies per year. Her movies lifted the spirits of Americans weary with the Depression.

Temple introduced two songs to movie audiences that have become classics: "On the Good Ship Lollipop" in Bright Eyes and "Animal Crackers in My Soup" in Curly Top. Her staircase dance with Bill "Bojangles" Robinson in The Little Colonel is often cited as one of the great moments in movies. Movies include "On the Good Ship Lollipop", "Animal Crackers in My Soup" and " Staircase Dance". [1] [2] [3]

As Temple entered her tweens, her charm began to fade. She made several fine movies as a teenager that include Fort Apache with Henry Fonda and The Bachelor and the Bobby-Soxer with Cary Grant. However, she had lost the charm that had made her a box office smash as a child. She retired completely from movies in 1950 to become a wife, mother, and homemaker.

Photo of Shirley Temple from her television program Shirley Temple's Storybook. This episode is "The Princess and the Goblins" (1961)

For the program's second season, the title was changed to The Shirley Temple Show. It faced stiff competition from a Walt Disney series, Lassie, Dennis the Menace, and a popular western. The program was cancelled at the end of the season. Temple remained on television; she appeared on talk shows and other programs in the following years.

Temple devoted the years following her career as an entertainer to public service. She was a republican. She eventually became ambassador to Ghana and then to the Czech Republic. She also worked in the White House organizing dinners and parties.

She had been suffering from breast cancer and was one of the first women to speak openly about the disease and her experiences with it. Temple was born on April 23, 1928 in Santa Monica, California. She died on February 10, 2014 at the age of 85 in Woodside, California, United States. [4] She was married twice, first to John Agar, then to Charles Black. She had one daughter with Agar, and a son and a daughter with Black.