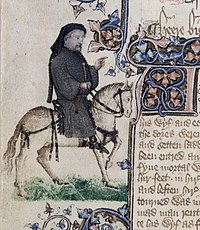 Geoffrey Chaucer (c. 1343 – 25 October 1400) was an English poet of the Middle Ages. He was born to a wine merchant in London. Around 1366, he married Philippa (de) Roet, a lady-in-waiting to the Queen. It is unknown if they had three or four children.

In his adult years, he traveled both in England and on the continent. He became a member of the royal court of Edward III as a varlet de chambre, yeoman, or esquire on 20 June 1367.

His most famous work is The Canterbury Tales.