Sir Francis Drake (circa 1540-1596) was an English corsair, explorer, and slave trader.

Drake was born into a large and poor Protestant family in Devon, in the southwest of England. At the age of 12 or 13, he went on board of a merchant ship which he took charge of when he was 20 years old.

In 1567 he left for an expedition to Africa with his uncle John Hawkins, with aim to buy slaves there and sell them in new American colonies. In a bay in the Caribbean, they were encircled by the Spaniards, from whom they narrowly escaped.

In the following years, Drake and his men plundered the Spanish colonies in America. This sailor became a fearless warrior. In 1572, at the head of two ships, he took from the Spanish the Nombre-de-Dios and Venta de Cruz locations, located on the east coast of the Isthmus of Panama.

In 1570, Queen Elizabeth gave him a letter of marque (which authorize him to continue robbing foreign ships without any possible future punishment from government).

Around the world[edit | edit source]

Francis Drake is the first Englishman to make a voyage around the world.

With five ships and 164 men, the fleet of Drake embarked Plymouth on December 13 of 1577. Just after departure, they come across a Spanish ship. On January 30, 1578, at Cape Verde Islands, the Englishmen capture two Portuguese ships along with their captain Nuno da Silva, the man having a great deal of experience in voyages and navigation While crossing the Atlantic Ocean, the fleet was caught in violent storm. On June 18, 1578, the fleet, having lost two ships, arrived to San Julian, in Patagonia. Drake decide to spend the winter (May–August 1578) in the bay. On August 20, 1578, the three surviving ships approached the Strait of Magellan, which they crossed in 16 days. He discovered South of the Tierra del Fuego, the passage by the Cape Horn.

Out of the strait, the fleet was caught by storm again. On July 23, the Golden Hind left the new colony and crossed the Pacific Ocean. He then went up north along the entire coast of North America, hoping to find a northwest passage to the Atlantic. Not having found a passage, he came to California and took the territory under the control of the British Crown.

23 July 1579 he left the new colony and crosses the Pacific Ocean. On the 3rd of November, he was in the Moluccas, where he was able to purchase spices. 1580 February 18, the ship ran into a rock. The ship was able to be repaired and reached Java on the 12th of March. On the 15th of June, it rounded the Cape of Good Hope, reaching Sierra Leone on the 22nd of July; the Canary Islands on the 22nd of August and on the 26th of September, 1580, it arrived with 59 survivors on board.

On April 4, 1581, Queen Elizabeth went on board the Golden Hind and ennobled Drake who became "Sir Francis Drake". 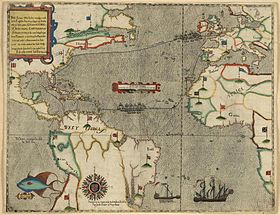 Map of Drakes Great Expedition in 1585.

Drake left again for an expedition against the Spanish colonies in 1585. He took possession of several places in the Canarian islands and it Capu Verte. He narrowly missed the convoy of gold and yet plundered the ports of Santo Domingo (1586), Cartagena and St. Augustine. Then the Queen nominated him as a Vice Admiral.

During the preparation of the Spanish Armada (1587), he took by surprise the port of Cadiz, destroyed about thirty Spanish ships and captured the gold of the Spanish Indies. At that time he got a reputation of very daring man.

Francis Drake became famous in the naval Battle of Gravelines (1588), to save his country from the Spanish Armada: he took the lead several ships, with other famous sailors of his time, and took over, among others, the Spanish flagship.

Next year, he tries without any success to reconquer the Portugal and in 1595 conquers some places to Spanishs in Central America. He died of dysentery in Panama in 1596, aged 55.