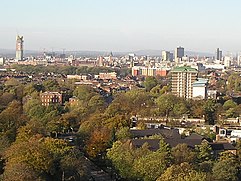 Manchester was founded in 79 AD by the Roman governor Giulio Agricola, who established a fort called Mamucium (hill in the shape of a breast).

In the 14th century a Flemish community settled there, which began the weaving of wool and linen.

The 500.000 inhabitants are called Mancunians.