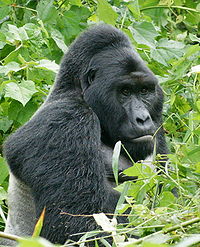 The eastern gorilla (scientific name : Gorilla beringei) is a species of gorilla. It is the largest living primate.