Western lowland gorilla in a zoo

Western gorillas are usually brown or greyish with a yellowish forehead. These gorillas have an overhanging tip on their nose that is absent in eastern gorillas.

Western gorillas live in rainforests in groups that may number between 2 and 20 individuals. Each group has 1 male, several females and their babies. Males leave the group when they reach sexual maturity.

A group of gorillas is called a "troop". The male leader of the troop is called a silverback, after the coloring on his back.

Gorillas have long lives. They may live for as long as 40 years in the wild. A group's home range may be as large as 30 square km. Gorillas do not actively defend their living spaces. Wild western gorillas use tools. 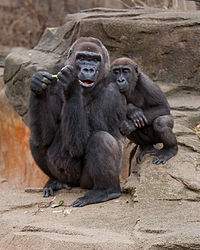 Western lowland gorilla mother and baby at the Cincinnati Zoo

Females begin breeding at age 8 or 9. Female gorillas give birth to one infant after a pregnancy of nearly 9 months. Newborns weigh about 2 kg (4 lbs).

Babies cling to their mother's fur. They ride on their mothers' backs from the age of four months through the first two or three years of their lives.

Young gorillas aged three to six years old are much like human children. They play, climb trees, chase each other, and swing from branches.

Mothers care for their babies about the first 3 or 4 years of its life. Because of these long time spans, a female will give birth only every 6 to 8 years.

The western gorilla's diet consists mostly of fruits. When fruit is scarce, the western gorilla eats twigs and leaves. Termites and ants, caterpillars, grubs, and larvae are also sometimes eaten. They enjoy the effect of caffeine in the Cola seeds they eat.

Western gorilla in the Cincinnati Zoo

The World Conservation Union lists the western gorilla as critically endangered. The ebola virus has depleted the species in some areas, with little likelihood of recovery.

Human developments such as farming and lumbering, poaching, and civil wars are diminishing the western gorilla's living spaces. Gorilla reproduction rates are low, making it difficult to restore population numbers.