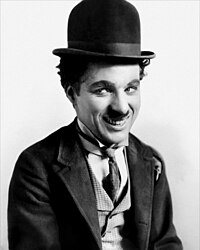 Chaplin as "The Tramp"

Charlie Chaplin (1889-1977) was a movie actor and movie-maker. He was well known for a character he played in movies called "The Tramp". His best known movies include The Kid, The Gold Rush, City Lights, Modern Times, and The Great Dictator. He is considered by many to be one of the greatest men to work in movies.