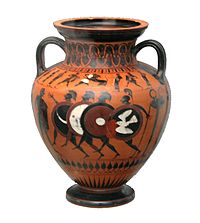 The Ancient Olympic Games were an athletic and religious festival held every four years in Zeus's honor at Olympia in Ancient Greece. The Games were a time when peace was declared throughout Greece and all wars were postponed. Every city-state was encouraged to participate.

The Olympics began in 776 BC, and continued to be held through Roman rule. The Games were abolished in 394 AD by the Emperor Theodosius in an effort to establish Christianity throughout the Roman Empire.

The Greeks ascribed a mythological origin to the Games. Herakles, for example, was said to have walked out the length of the stadium. Victors were awarded a palm leaf immediately after their event, and crowned with an oak leave wreathe during the last days of the Games.