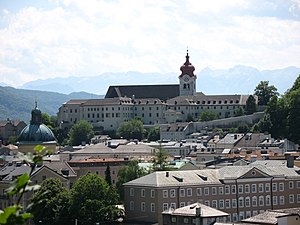 The Sound of Music is a 1965 movie based on the 1959 musical of the same name. The musical was based on an autobiography by Maria von Trapp. The movie stars Julie Andrews as Maria and Christopher Plummer as the Captain. It was directed by Robert Wise.

The movie is about Maria, a young postulant at Nonnberg Abbey in Salzburg, Austria. She is thought too full of high spirits for the life of a nun and is sent by the Mother Abbess to be a governess to the seven children of naval Captain Georg von Trapp. The Captain is a widower and a very strict father. Maria softens the home environment, making life a joy for the seven children.

The Captain falls in love with Maria and they marry. At the end of the movie, the Nazis want to involve the Captain in their evil plans. Although the Captain is closely watched by the Nazis, he escapes with his family over the Austrian border and into Switzerland.

The songs were written by Richard Rodgers and Oscar Hammerstein II. The songs include "Edelweiss", "My Favorite Things", "Climb Ev'ry Mountain", "Do-Re-Mi", "Sixteen Going on Seventeen", "The Lonely Goatherd", and the title song, "The Sound of Music".

The movie won five Academy Awards including Best Picture. In 2001, the United States Library of Congress selected the film for preservation in the National Film Registry as it was deemed "culturally, historically, or aesthetically significant."