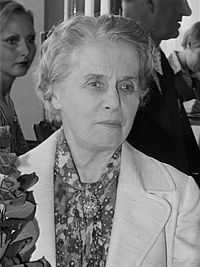 Founder of The Royal Ballet Ninette de Valois in 1974

It was granted a royal charter in 1956 as Britain's flagship national ballet company. It has its own training school in the Covent Garden Opera House. The company was previously known as Vic-Wells Ballet and Sadler's Wells Ballet.