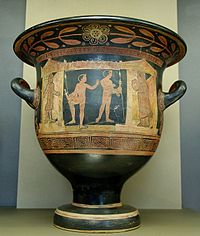 The Oresteia is a trilogy of plays by Aeschylus. The plays are about the murder of the Greek general Agamemnon. The trilogy was originally performed at the Dionysia festival in Athens in 458 BC. It won first prize.

The plays in the trilogy are Agamemnon, The Libation Bearers, and The Furies. The trilogy was originally followed by a satyr play called Proteus. This play is lost.