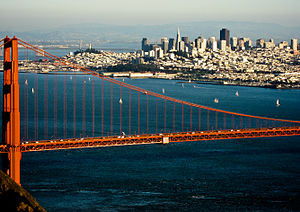 The Golden Gate Bridge, with San Francisco in the background

San Francisco is the second largest city in California, United States. In 2013, the city proper had 837,442 people.[1] "San Francisco" means "Saint Francis" in Spanish, as the city was founded by Spanish colonists and later claimed by Mexico. It was a small town until the middle of the 19th century, when the gold rush attracted people westwards, and the city soon expanded to be the center of the Pacific Union railway line. Many Chinese immigrants moved there to help build the Transcontinental Railroad, and stayed, giving the city one of the largest Chinese populations in the United States. The city is famous for the earthquake of 1906. About 3,000 people died and over 80% of San Francisco was destroyed. In the 1960s, the Haight-Ashbury district of the city was famous for its "hippies".

It is the center of the San Francisco-Oakland-San Jose metropolitan region, also called the Bay Area. Its downtown is known for sites such as the Coit Tower, a large pyramidal skyscraper. The most familiar landmark is likely the Golden Gate Bridge, which connects downtown San Francisco to a large empty park across the bay. Off the coast is the no longer active Alcatraz Island, a famous and allegedly haunted prison.